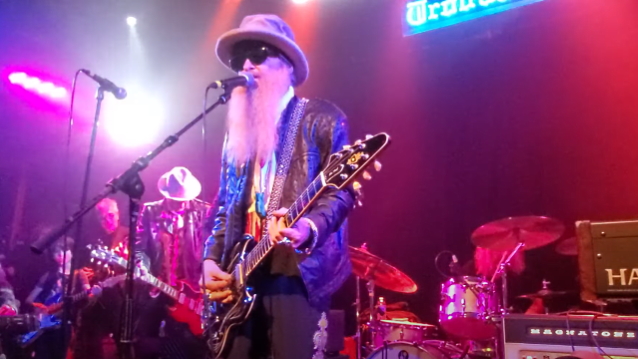 Former GUNS N' ROSES members Matt Sorum and Gilby Clarke, along with blues rock guitarist Joe Bonamassa, were among the guests who performed with Billy Gibbons at the ZZ TOP frontman's 72nd-birthday bash last night (Thursday, December 16) at The Troubadour in West Hollywood, California. Fan-filmed video footage of the concert can be seen below.

Gibbons is an American musician, producer and actor, best known as the guitarist of the American rock band ZZ TOP. Gibbons formed ZZ TOP in late 1969 and released ZZ TOP's first album in 1971. The albums that followed, "Rio Grande Mud" (1972) and "Tres Hombres" (1973), along with extensive touring, solidified the group's reputation as a hard-rocking power trio. In the 1980s, ZZ TOP released its three biggest-selling albums: "Eliminator" (1983), "Afterburner" (1985) and "Recycler" (1990). A wave of music videos for the hit singles "Legs", "Gimme All Your Lovin'", and "Sharp Dressed Man", among others, became mainstays on MTV. Gibbons was ranked at No. 32 on the 2011 Rolling Stone list of the "100 Greatest Guitarists Of All Time." ZZ TOP was inducted into the Rock And Roll Hall Of Fame in 2004.

Apart from his five decades-long role fronting ZZ TOP, Gibbons has in recent years recorded three much-lauded solo albums for Concord Records, including "Hardware", released this past June. To cap off the year, Concord released a singular single, "Jingle Bell Blues", in November. It's Billy's reworking of the eternal "Jingle Bells" with some significant modifications or "Kustom" touches.

The follow-up to Gibbons's 2018 solo LP "The Big Bad Blues", "Hardware"'s title is an homage to Joe Hardy, the longtime ZZ TOP collaborator who died in 2019. The album was recorded in a desert studio in Palm Springs, California.

An All-Star Band turns it up to celebrate Billy Gibbons birthday, with Special Guests Robby Krieger, Joe Bonamassa, and many more surprise special guests. Hosted by the Guigui Family Band.