Avant-garde psych metal band ZOROASTER, Indianapolis doom metal trio THE GATES OF SLUMBER and Belgian "über doom" unit SERPENTCULT will team up for the "North America is Doomed" tour this summer. The 14-city trek will kick off on August 1 in Chicago, Illinois and will hit major markets, including New York City, Philadelphia, Boston, Cleveland, Toronto and Montreal.

Already being called "one of the most anticipated underground metal packages of 2009," the tour spotlights three of metal's most talked about new bands and will be headlined by ZOROASTER, the Atlanta-based group who has most recently been turning heads with its new album, "Voice of Saturn". Fresh from a number of high-energy gigs at SXSW 2009 and a headlining appearance at the inaugural Scion Rock Fest alongside like-minded peers HIGH ON FIRE, MASTODON and NEUROSIS, ZOROASTER continues to bring its revered live show — described as "an obliteration of the senses" — to every city it can.

Special guests on the tour include THE GATES OF SLUMBER, whose high-potency live performances have garnered serious word-of-mouth kudos and built it a cult following amongst the die-hard traditional metal/doom community and the Belgian band SERPENTCULT, whose massive sound, self-described as a "neck-breaking, down tuned riffing apocalypse," has drawn parallels to CELTIC FROST, CATHEDRAL and ELECTRIC WIZARD and met with much critical acclaim within underground metal circles.

ZOROASTER guitarist/vocalist Will Fiore states, "This tour is going to be so heavy, it's scary! Each and every show is going to feature an amazing night of massive riffs, so come out and get lost. This is going to hurt…in all the right ways." 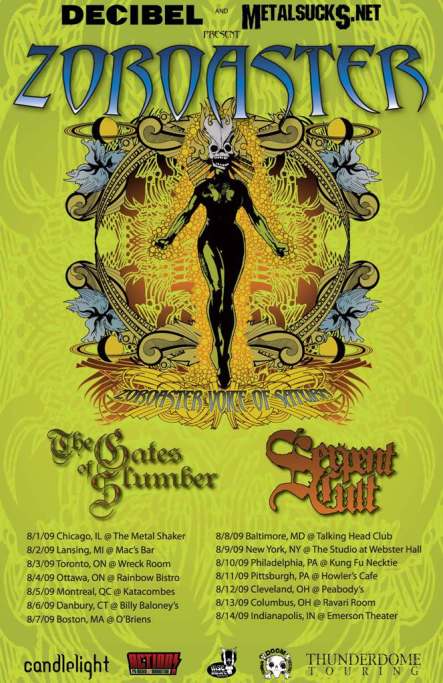