Avant-garde psych-metal trio ZOROASTER has completed work on its new album, "Voice of Saturn". The follow up to "Dog Magic" is scheduled for release on March 10, 2009 via Terminal Doom Records.

Recorded at The Living Room (THE BLACK LIPS, MASTODON) in Atlanta with engineer Ed Rawls, "Voice of Saturn" pushes ZOROASTER's heady mix of mammoth metal and psychotropic shoegaze to skyscraping new heights. From the galloping post-SABBATH rock of the roll out track "Spirit Molecule" to the concrete street cleaning of "Lamen of the Master Therion" and through to the tribal percussive vertebrae of the album's "hidden" closer, "Voice of Saturn" administers in-the-red levels of both the band's mysticism and barbarism in spades. The record features a guest appearance from friend and fellow Atlantean Brent Hinds of MASTODON, who contributes a searing guitar solo to the song "White Dwarf".

ZOROASTER, who has been called "one of the U.S.'s most promising underground metal bands," formed in Atlanta in 2003 out of the need for "sedation by high volumes and low frequencies." The group has met to shining praise from both metal and indie rock press alike since its formation, receiving accolade for its deafening power, use of left-of-center instrumentation (which has included Moog synths, theremins, ominous vocal choirs and even brass sections) and unique take on heavy music. ZOROASTER features a live show that has been described as "an obliteration of the senses," earning the three piece the title of "Atlanta's loudest band."

When asked for a comment on "Voice of Saturn", ZOROASTER guitarist/vocalist Will Fiore stated, "With 'Voice of Saturn', we've continued to expand on our sound, while still keeping that heavy base we started with. The new album is another step in our ongoing evolution."

The song "Spirit Molecule" has been posted online at this location. The album's cover art, courtesy of Brian Mercer (MELVINS, HIGH ON FIRE), can be viewed below. 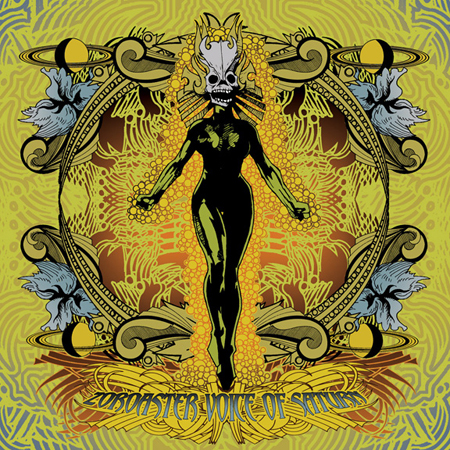