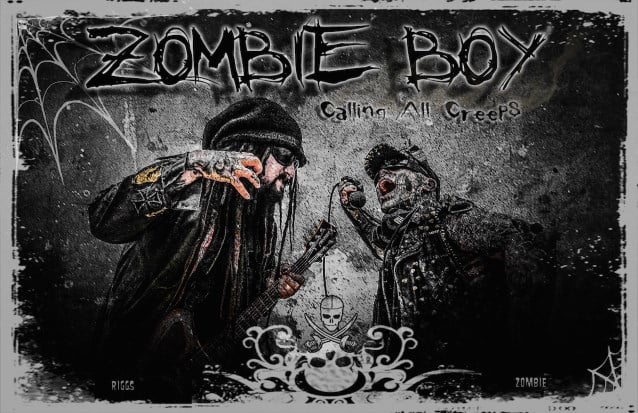 Former ROB ZOMBIE guitarist Mike Riggs has launched a new musical project with Rick Genest, the Canadian artist, actor, and fashion model born in Lasalle, Montreal. Genest is also known as Zombie Boy for the skeletal tattoos covering the majority of his body.

Zombie Boy played a leading role in Lady Gaga's video "Born This Way" after being discovered on the web and contacted through Facebook by Nicola Formichetti, Lady Gaga's personal stylist. Formichetti became instantly fascinated with Genest and invited him to complete some photo and video shoots for him.

The official lyric video for the "Zombie Boy 666 Medley" from the new project, simply called ZOMBIE BOY, can be seen below.

ZOMBIE BOY is expected to release its debut album in the summer and will be touring throughout the spring across the United States.

Asked sets this project apart from SCUM OF THE EARTH, Riggs told Bloody-Disgusting.com: "Several things… First off, I am not doing vocals… Secondly, I have a partner in crime who has a different view on the music with some pretty far-out-there ideas (compared to mine) that pushes the music into a darker realm. It's surrealistic and nightmarish at times, campy, with lots of creepy, haunting-type breakdowns. For example, there is a song called 'From The Mud' that starts off with a sample of a toilet full of maggots with flies buzzing around it and then the bass kicks in. When you listen to the song, it's quite peaceful sounding even though it's a toilet full of maggots, and the bridge of the song breaks down to the maggots and flies with clean guitar and vocals only. It's not a gross-out tactic, it has a sad undertone and I don't think anyone would have ever guessed that's what it was."

Riggs added: "There is a little bit for everyone with this project, no matter how weird you are."