"Well, I'm back from the beautiful Bay Area, and the vocal tracking for the TENET album was an awesome experience.

"Zetro is a machine, I really mean that. I've worked with only a few who are as relentless in the studio as he is. By that I mean he came to the session with his game face on. He's an intense guy when he's at the mic, and that intensity came shining through on all of his performances. Devin [Townsend] shows an equal intensity in the studio, and I saw that same focus in Zetro. I'm not comparing them — they are about as different as one can get — but I love that drive, that fierce determination. He was a pleasure to work with, I look forward to more.
"It took a day to get comfortable with each other 'work-wise' as we hadn't met until the night before when we had a rip-roaring BBQ at Glen's (good times!), we worked on tones, all that studio stuff, and then in only four days, he put the boots to the songs and it was done. Fucking killer, man, just killer. There were a few songs that he did in one take! Holy crap! I'd look over at the other guys in the studio and they'd just say, 'Yeah, that's Zetro.' Like I said, a MACHINE! He's got that old-school style, and it suits the TENET music perfectly...new music, but with a decidedly old-school vibe...it makes my blood burn, I love it.

"Vinny Wojno is behind the controls now, and he is doing a fucking kick-ass job... His sound is amazing, and he's a super-cool cat. We have the same listening tendencies, it seems, and that is a real plus in the studio. We are 'hearing' the same things and are on the same page when it comes to sounds etc. Killer. I really enjoyed the working environment there... We were recording at the TESTAMENT guys' studio; they were very gracious in letting us use it while they are on tour. Thanks, guys!!

"A lot of old friends came by to visit, and I met some new ones too. I tell ya, the Bay is still rockin' as far as I'm concerned.

"I stayed with Glen and his family while I was there. What a great family! There is always something funny happening, and believe me, I love the funny stuff.
Silliness is highly underrated...hell, it keeps me sane (see ZIMMERS HOLE, haha!).

"Thanks to Glen, Perri, Zack, Zane and the Kitty-Hawk for having me there, and thanks for treating me as family. Thanks also to Brad Yip for being over-the-top helpful. You rock, bro.

"Well, that's it for now...the background vocals are getting done next week, some final prep and then mixing will begin. YEAH! I am so stoked to be getting this MF done. Also, me and Glen have been bouncing around some pretty sick riffs...getting that steamroller fired up!"

Check out photos from Deadly Embrace at this location. One of the pictures can be viewed below.

Souza previously stated about his involvement with TENET: "We are all professional musicians, and have highest expectations for this new project. And we all feel that we will deliver a brutal debut album.

"Music has always been a huge part of my life, and playing with [TENET] is like joining an all-star metal band.

"When I first heard their music, I was totally blown away. The music is very heavy, at times fast. It has old-school elements, but is modern and fresh.

I'd like to thank all the fans who have supported me through all the years, with all the bands that I have played and recorded with. It feels good to be excited about music again, I couldn't have asked for a better situation to step into."

Simon last year uploaded three demo tracks from his TENET project at the official TENET MySpace page. Check out the songs "Indulge Me", "Unnameable" and "Crown of Thorns" at this location. 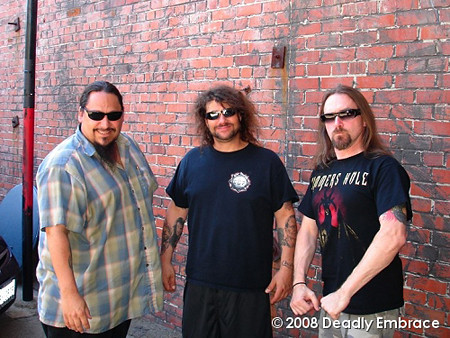