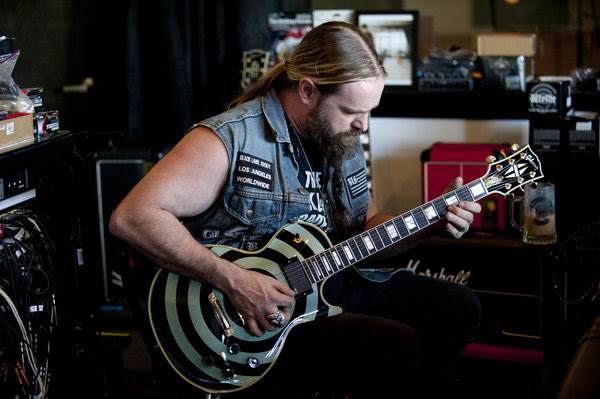 Zakk Wylde's (BLACK LABEL SOCIETY, OZZY OSBOURNE) Pelham Blue Bullseye Gibson LP custom guitar, along with his leather vest, were both stolen on March 14 from his tour bus at the Chicago, Illinois stop of the Experience Hendrix tour at the Chicago Theater. The guitar (pictured) has since turned up at Royal Pawn, a Chicago area pawn shop that was the setting of truTV's "Hardcore Pawn: Chicago" reality TV show.

The shop's owners told the Chicago Tribune that a man came in to sell the guitar on March 24 and the guitar then sat in storage at the pawnshop for the 30-day period required under Chicago ordinance. Randy Cohen, who, along with his brother Wayne, owns the shop, said an employee originally paid around $50 for the guitar. The brothers eventually realized the guitar was likely more valuable and they took it to Chicago Music Exchange in the city's Roscoe Village neighborhood, where staff quickly identified it as Wylde's stolen guitar.

As part of its investigation, the police has taken information about the seller.

Wylde's manager, OZZY OSBOURNE bassist Rob "Blasko' Nicholson, said the guitar has not yet been returned to the rocker.

Speaking to the Chicago Tribune shortly after the theft took place, Zakk said about the incident: "I had my guitar in the tour bus because this is the home.

"I thought somebody might have picked [the guitar] up and put it in the back lounge (inside the theatre).

"In 25-plus years, I've never had anything stolen," he added.