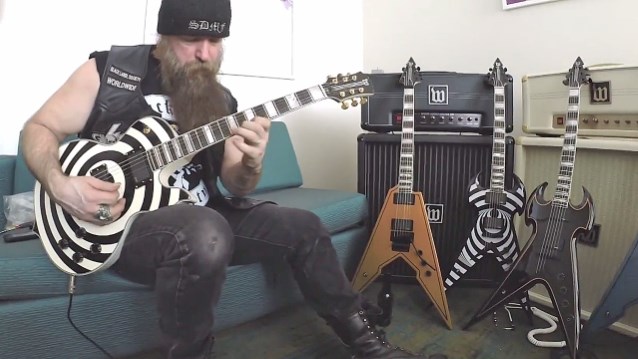 In the most unexpected guitar news of this year's NAMM show in Anaheim, California, Zakk Wylde (BLACK LABEL SOCIETY, OZZY OSBOURNE) has launched his own range of guitars and amps under his new brand Wylde Audio, with more products to follow. Gear Gods got a private viewing of what Zakk's been up to. Check out the clip below.

Wylde, who was previously sponsored by such companies as Gibson, Marshall, Dunlop and Electro-Voice, tells Billboard.com: "It's beyond an honor to have a signature anything. I still have great relationships with those companies, just like with Ozzy and [Osbourne's wife/manager] Sharon. I still love them, and you still talk to your folks, and you still hook up with them on the holidays."

Wylde says that there are plans for Wylde Audio to include "everything down to studio plug-ins with ProTools. Headphones. Anything you can think of audio: cable, strings; we'll be involved in that."

BLACK LABEL SOCIETYs' "Angel Of Mercy" video was directed by longtime collaborator Justin Reich of the Antimatter Studio. The clip depicts a stripped down version of the wall of sound that is widely associated with the band.