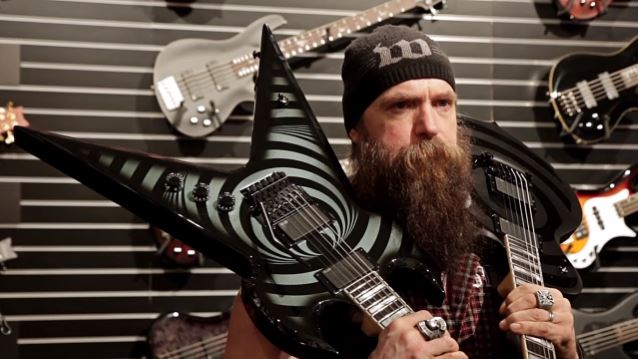 Legendary guitarist Zakk Wylde will reunite with iconic BLACK SABBATH frontman Ozzy Osbourne for a summer tour that marks the thirtieth anniversary of when the two first collaborated together.

Speaking about how his reunion with Ozzy came about, Zakk told the 98.9 The Rock radio station at yesterday's (Saturday, June 3) Rockfest at Kansas Speedway in Kansas City (see video below): "Oz called up. He said at this juncture Gus couldn't do it. And he said, 'Who else could get the dishes as clean and the linens as fluffy as they were back in the day?' So that's the reason why… It really has nothing to do with the guitar playing. It's just 'cause Gus couldn't do it. So they're, like, 'Well, we'll let him play guitar while he's here anyway doing dishes and linens.'"

It was announced on April 28 that Wylde would be rejoining Ozzy's backing group for all his upcoming 2017 solo show dates. Osbourne's touring lineup will also include Rob "Blasko" Nicholson on bass, Tommy Clufetos on drums and Adam Wakeman on keyboards.

Within a couple of hours of the announcement, Gus, who played on Ozzy's latest studio album, 2010's "Scream", released a statement thanking his former boss and praising the singer's decision to rejoin forces with Zakk.

"It's been an honor and a privilege playing by your side since 2009," Gus wrote on social media. "Nothing but great times and an experience of a lifetime." He added: "As a fan, it's great to see Ozzy and Zakk back together. It's been long overdue.

In a 2010 interview with Metal Insider, Gus said that he "wouldn't be surprised" if Ozzy one day felt like playing with Zakk again. He said: "For me, when I was growing up, Zakk was there. The first time I ever saw on TV, Zakk Wylde was on guitar. From my generation, Zakk Wylde was the man. As a fan above all, I know these guys, they're like family more than just a team. So I definitely wouldn't be surprised if one day he would jam again with Ozzy. I know these guys love each other."