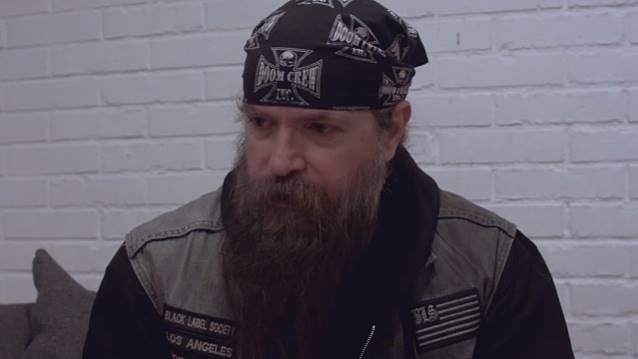 Joe Daly of The Weeklings recently conducted an interview with Zakk Wylde (BLACK LABEL SOCIETY, OZZY OSBOURNE). A couple of excerpts from the chat follow below.

The Weeklings: You've said that you don't see a huge difference in the sound between [the new BLACK LABEL SOCIETY studio album] "Catacombs Of The Black Vatican" and "The Song Remains Not The Same", but the new album feels notably more focused and aggressive across the board, even with the ballads. Did you have a distinct vision for how the new record would sound when you began writing it?

Zakk: No, that's what I think is one of the exciting things about making a new record. We're like a bunch of Vikings going out and saying, "Let's see if we can find something." It's not so much discovering America as it is running into it. We're not discovering anything, we're just running into it, man! Mind you, we will stake the claim that we did discover it though… [Laughs] The way I look at it, there's a bunch of bones buried within this two-mile radius and if we don't find anything today, we'll just go out there and dig tomorrow. It's just a matter of us finding them. As far as getting bummed out or pissed off or getting writer's block, you just keep digging until you find something you like. That's the truth.

The Weeklings: You've got a couple new guys in the band now — Dario Lorina on guitar and Jeff Fabb on drums. How has that affected the sound?

Zakk: All the cats that I've ever rolled with in BLACK LABEL SOCIETY, we're like a bunch of Navy SEALs — everybody knows why we're there, we're gonna go kill some bad guys and then we'll go home. The whole thing is that there's no bitching and moaning and whining; we don't have those problems in BLACK LABEL SOCIETY. In BLS, it's your gig until you don't want to do it anymore. Whoever comes in to either fill in for you or take your place, it's their gig then until they don't want to do it anymore and then you can always come back and do it again. So Chad [Szeliga, drums] was doing the gig with us and then he got offered to go out with Scott Stapp when we had some downtime, after we made the record. Chad was, like, "Zakk, I'm going to go out with Scott for a bit," and I just said, "No problem. Go kick some ass. We love you and you did an amazing job on the record." This really is a brotherhood. I love all the guys I've played with, from the very beginning to the moment when you and I are talking right now, because they're all unique. It's like if I owned the New York Yankees — every guy who has put on the Yankee jersey and whose number has been retired and commemorated out in Monument Park — each one of them are unique and amazing and somebody who's contributed to the team immensely. So now it's Jeff's gig until he doesn't want it anymore, and it's Dario's gig until he doesn't want to do it anymore. Nick [Catanese, former BLACK LABEL SOCIETY guitarist] was just, like, "Zakk, I'm writing my own stuff now and I'm doing the stuff with some guys and having such a blast. I think I'm going to do this full time." I said, "Alright. Nick, man, I love you, brother. We all want you to succeed and we want you to be happy." Nick will always be a BLACK LABEL brother, so it's all good. That's the way we roll and it really makes it unique. The lions only hang out with lions — there are no hyenas.

The Weeklings: Any thoughts on the news that AC/DC might be hanging it up?

Zakk: That's just terrible. It sucks. It doesn't matter how much money you have — even if Malcolm [Young] and those guys were just playing at the bar band level, if he was making enough to pay the bills and playing the music he digs playing and then he had to stop, it would still be so sad, man. I just hope he gets better so he can have a good life. It definitely sucks, but all you can do is say a prayer for him and hope he gets better. I don't know anyone who doesn't love AC/DC, so Malcolm will have no shortage of love coming to him.

Read the entire interview at The Weeklings.