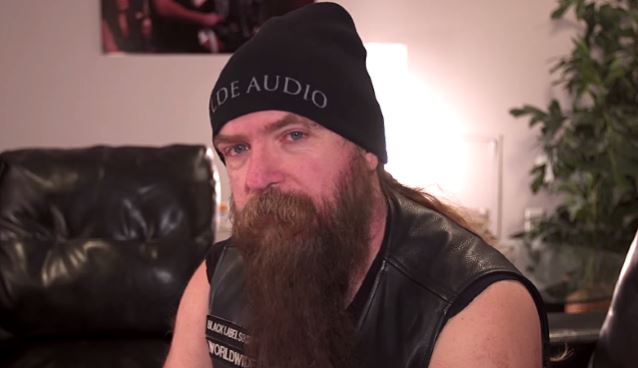 In a brand new behind-the-scenes clip from VH1 Classic's "That Metal Show", Zakk Wylde (BLACK LABEL SOCIETY, OZZY OSBOURNE) spoke about what it was like when he auditioned to join Slash in GUNS N' ROSES in the mid-'90s.

"We just had some ideas laying around and stuff like that, but nothing amounted to where Axl [Rose] sang on stuff and had lyrics written and everything like that," Zakk said (see video below), "We just had riffs lying around and stuff like that, but… It was great hanging out. 'Cause all the guys were there, you know what I mean?! It was Slash, Axl, Duff [McKagan, bass], Dizzy [Reed, keyboards], Matt [Sorum, drums]; it was all the guys. We were all jamming and stuff like that. It was a good time. It was at that point nothing was going on and I wasn't jamming with The Boss [Ozzy Osbourne]. Then I just had a batch of riffs and ideas laying around. I just said, 'I'll do it myself.' And that's when BLACK LABEL SOCIETY was born. And that's why I'm still living in a van down by the river. So I figured, maybe I wanna do this myself."

Asked what a Slash/Zakk Wylde combo in GUNS N' ROSES would have sounded like, Zakk told Gibson.com: "It sounded like the riffs I write and the way I write, mixed in with the way the guys write, you know what I mean?! It would have been like… When I was jamming with Slash and all the guys, even if I'm in the band, there's only one guy that's playing the solos to 'November Rain', 'Sweet Child O' Mine' and all those classic songs. I'm not going to do anything there. But the future stuff that we would have been writing, it would have been cool! Because I love Slash's playing and I'm buddies with him. It would have been cool, but with those guys, there was nothing happening, so we were jamming, but it wasn't going anywhere."