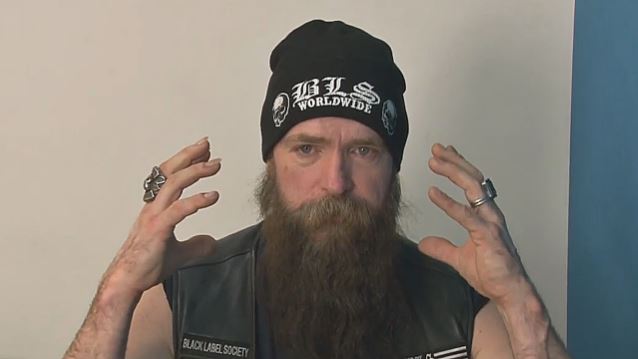 Former OZZY OSBOURNE guitarist and current BLACK LABEL SOCIETY leader Zakk Wylde has commented on the reports that AC/DC was forced to postpone the remaining ten dates on its recent U.S. tour after singer Brian Johnson was advised by doctors that he faces "total hearing loss" unless he comes off the road immediately.

Speaking to Artisan News, Zakk said (see video below): "That's really sad, man. 'Cause Brian's… I met Brian one time. He's a really sweet guy; he's super cool. But with the hearing, I read [an interview] where Brian was saying [the hearing loss was caused by] him being in race cars and not wearing his earplugs when he was in the car. And he said he actually heard his eardrums explode when he was in the car, 'cause he didn't have the earplugs in. 'Cause he said it didn't have anything to do with music."

Zakk continued: "Me personally, if you don't have anything aimed directly at your head… That's what it's all about. Pete Townshend [of THE WHO] said [his hearing loss] was [caused by] all the years of cranking the music when he was mixing the records and making the album, of just blasting it, so it's right here [puts hands close to his ears] — as opposed to surrounding it. I mean, a 4x12 [guitar cabinet] is a very directional cabinet, so if you step to the side of it… especially the bottom ones, 'cause it's only hitting your legs. I mean, the top ones is where… If you're standing right in front of it, that'll smash you. Anything that's not directional… I mean, if anything's near you, that's when it's gonna really blast you; it's like a ice pick going off in your head."

Although AC/DC has said that the gigs will be rescheduled for later in the year, it has not given any indication yet of when. But perhaps most shockingly, the band will likely make up the concerts with a "guest vocalist" — possibly GUNS N' ROSES frontman Axl Rose, who was photographed last week exiting the same rehearsal facility as members of AC/DC.

Asked if he thinks AC/DC can carry on for another decade with yet another lead singer, Zakk said: "Supposedly [late AC/DC singer] Bon [Scott] was the one that recommended… he was talking about how awesome Brian was. He saw him playing one night — Bon did. And he was saying, 'I saw this singer, this Brian Johnson guy, who's amazing,' when Brian was doing his band [before AC/DC]. And that's how they got tipped off on Brian, how they knew about him, was through Bon. So who knows? Brian might have one of his buddies he knows that's a great singer and just pass the torch. Just kind of like the whole Malcolm [Young, former AC/DC rhythm guitarist] thing, with their nephew [Stevie Young stepping in after Malcolm was diagnosed with dementia] or whatever. I mean, it's up to the fellows, but I just wish Brian gets better, though."

Current AC/DC ticket holders can hold on to their tickets for the rescheduled dates or receive a refund at point of purchase.

AC/DC has been on the road since last year in support of its 16th studio album, "Rock Or Bust", which arrived in December 2014.

This album cycle has been plagued with bad luck, including the retirement of founding member Malcolm Young, and the arrest of drummer Phil Rudd on charges of drug possession and threatening to kill.