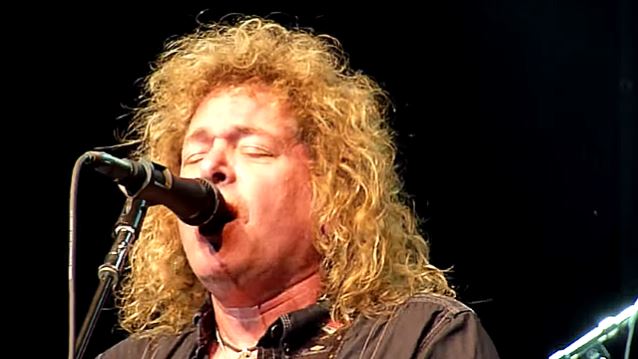 Jacky BamBam of Philadelphia's 93.3 WMMR radio station recently conducted an interview with Y&T guitarist/vocalist Dave Meniketti. You can now listen to the chat at this location.

Asked about the time in 1976 when then-AC/DC singer Bon Scott traveled on Y&T's tour bus while the two bands were on the road together, Dave said: "Our tour bus was not much of a tour bus. We had a Dodge van. [Laughs] And it was a really long Dodge van, and it was a unique one, because I've never seen one since like this. It had a bent seat in the front — the driver, passenger and somebody else, I suppose — and a bent seat in the very back — way back — and just a padded bunch of carpet in between. And so a lot of us just sat on the floor while we traveled across the country. And so did [Bon], as a matter of fact."

He continued: "Yeah, Bon Scott, the very first day that we did soundcheck together, he came back and he started talking to us and everything. And he was, like, 'What are you guys travelling in?' And we showed him. And he was, like, 'Would you mind if I come with you?' He goes, 'These guys are really boring.' He goes, 'They won't let me drink. They won't let any groupies on the bus.' So he figured, a bunch of young kids out on the road for not too many years, he's gonna have more fun with us. And I'm absolutely certain he did."

Meniketti also spoke about Y&T's April 24, 1981 concert at the Starwood in West Hollywood, California, which featured a support set from MÖTLEY CRÜE in what was the latter band's first-ever gig.

"Oh, yeah. Absolutely I remember that," Dave said. "I didn't know if was their first show until years and years later. And I guess they put out their first book and it came out in that that show was their very first show in L.A., their hometown. I didn't know that. But all I know is that they were supposed to be this up-and-coming thing, and I remember Phil [Kennemore] and I, our old bass player, sitting in the balcony at the Starwood overlooking the stage and watching a few songs, going, 'These guys are crap.' [Laughs] And I ate those words a million times over. And then we ended up opening for them. Well, they opened up for us a couple of more times. They came up to our hometown area, when we headlined a place called Concert Pavilion, one of those big outdoor kind of places. And then after that, of course, they took off and we ended up opening for them in the mid-'80s. So it was cool."