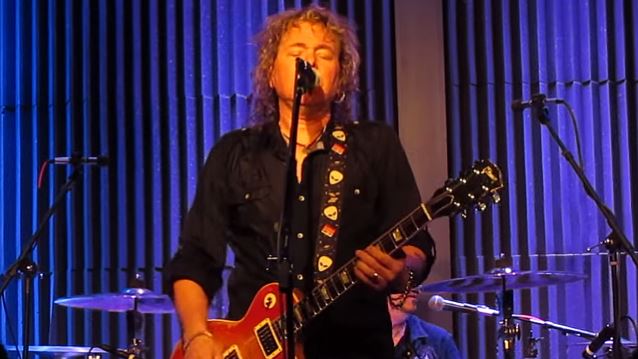 Y&T mainman Dave Meniketti says that he was offered the guitarist position in Ozzy Osbourne's band, claiming that it happened while Y&T toured with AC/DC more than three decades ago. Osbourne, who was temporarily utilizing the services of NIGHT RANGER guitarist Brad Gillis following the death of Randy Rhoads, was looking for a more permanent replacement, and approached Meniketti when the two came face to face on the road.

"We were playing with AC/DC in 1982 on the 'For Those About To Rock' tour," Meniketti recalled to The Metal Voice (hear audio below). "And the last show on the U.K. tour was in Dublin, Ireland, and he was waiting for us when we got off stage, after walking back into our backstage room. And he was there with [his wife and manager] Sharon, and he got down on his knees in front of me — of course, [with] the [other Y&T] band members standing only a few feet away — and did the thing where you… up and down with the hands in the air: 'Will you please join my band?'"

He added: "It was a cool thing. I mean, it was fun. It was something to be proud of, for sure, because… I mean, it was Ozzy, and I would imagine he's pretty particular about who he has playing with him. But I kindly declined and said, 'I've got my own fish to fry here, but I appreciate the offer.'"

Meniketti previously spoke about the encounter in a separate interview with writer Dave Ling. He said: "In front of my entire band, Ozzy got down on his knees and said, 'David, would you please join my band?' I looked around and thought, 'Oh no. This isn't gonna go down well with the rest of the guys.' I replied, 'Thanks,' but I was kind of busy, to which he insisted that I had to teach his guitarist, Brad Gillis, how to be a rock star. He said that Brad was too much of a square."

Meniketti also talked about Y&T's plans to record a follow-up album to 2010's "Facemelter". He said: "We need to have time off the road to spend a good matter of maybe two or three months straight, so that we can sit down and concentrate on writing for the next record. I don't do well with writing when I'm on the road, because my time is so crazy. I'm constantly doing interviews or trying to sleep for my voice or soundchecks or travel, or whatever the thing is. I just want those moments that I actually have where I can relax to just clear my mind. I need that, sort of, carved out space of time to write, and that's gonna happen — that's gonna happen next year. We're gonna spend a good period of time off the road and just finish this record and try to get something done by the end of 2016."