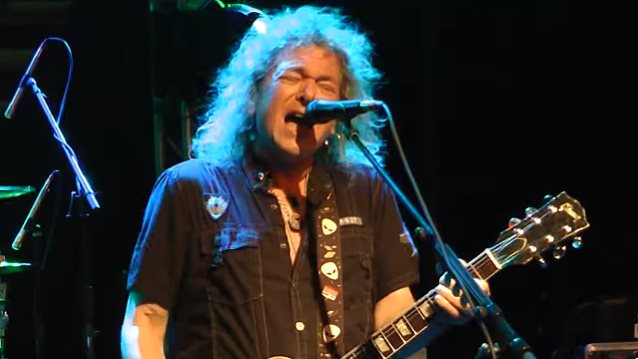 Clint Switzer and Paul Lagana of the "Music Mania" podcast recently conducted an interview with Y&T frontman Dave Meniketti. You can listen to the full chat below. A few excerpts follow (transcribed by BLABBERMOUTH.NET).

On the band's work ethic:

Dave: "We do a lot of work, there's no question about it. It keeps us busy. It keeps the band kicking butt. We wouldn't have it any other way. If we're off too many weeks in a row, it drives us crazy. We get stir crazy. It's like 'When are we going to play again? Come on!'"

On whether Y&T's longevity means more to him than commercial success:

Dave: "Oh yeah! There's something to be said for staying the course. We've definitely done that over our career. We've been one of those bands who have been lucky enough, of course, to be popular enough to keep our music going and to keep us touring and sell records. But we've always looked at ourselves and said, 'Okay, there's these bands who have come up, opened for us, and then surpassed us, but then a few years later, they're no longer together or something happened or any number of other things.' Where we just keep going. We keep going and it's a semi-uphill thing, rather than having the big peak and then the big drop. We just kept it going in a good fashion as far as the popularity of the band and the ability to keep doing what we're doing. How many guys can say 43 years into it that they still have fans that love to come out to shows and allow them to make money and stay alive and keep doing the same thing that they loved their whole life? That's a hard thing to do."

On whether he feels Y&T was an influence on bands like QUIET RIOT, POISON and RATT:

Dave: "As far as the L.A. scene, there's no question, even though we're not from L.A., we became popular down there from just hitting that market a lot and getting on Highway 5 and driving five hours and doing it two or three times a year when we first started out. We got to a point where we were headlining down there two shows a night, three nights in a row on the weekends when we would go down. A whole lot of the rock stars-to-be were in the audience, watching us. We did have quite an impact on the L.A. scene as it turned out, even though we were not living in L.A. and were not an L.A. band. That was gratifying to see. We still hear about it all the time from musicians."

On how their 1985 hit single "Summertime Girls" changed the course of Y&T's career:

Dave: "Well, it was a double-edged sword, wasn't it? We were happy to have the success of the single of 'Summertime Girls' and that was all good because it was all happening at a time when we were becoming more and more popular because of 'Black Tiger' and 'Mean Streak' and 'Earthshaker'. At the same time, it was frustrating for us to be pigeonholed as 'Y&T those are those guys with the 'Summertime Girls' song.' That was just one song of hundreds of songs that we had been responsible for that was quite different from most of the rest of what Y&T was all about. It's still like that to some degree, although we re-cemented among fans many years what Y&T was all about. It's still funny to hear that on occasion when somebody goes 'Those are those 'Summertime Girls' guys.' And we go 'Oh dude, you got to come to a show.'"

On how he feels knowing so many high-profile musicians respect Y&T:

Dave: "We've been a lucky bunch as far as having the respect from the guys who are our peers and the fans as well. That's been a good thing. I remember only two times in the last 30-something years or so people going 'Man, you should do something. You should go and punch somebody. Do something outrageous for god's sakes. Then you'd get out in the news and finally get a lot of press.' And it's like, 'If that's the way you got to do it, then nah, that's not what we'll do.' There's something to be said for being an outrageous style of personality or just a complete screw-up that no matter what you do, you're always going to do something dumb enough to get in the press. That's just not our style. We are what we are. We're just going to keep going with it."

As previously reported, Y&T is putting the finishing touches on its documentary, "On With The Show", to be released before the end of the year. The film is expected to be built out of the hundreds of hours of personal footage shot over the years. It is set to cover the band's earliest days of rehearsing in drummer Leonard Haze's grandmother's house, then move through the first two albums, touring with JOURNEY, BOSTON and QUEEN, to their big breaks with AC/DC, OZZY OSBOURNE and DIO.

The band's first studio album in 13 years, "Facemelter", came out in Europe in May 2010 via Frontiers.