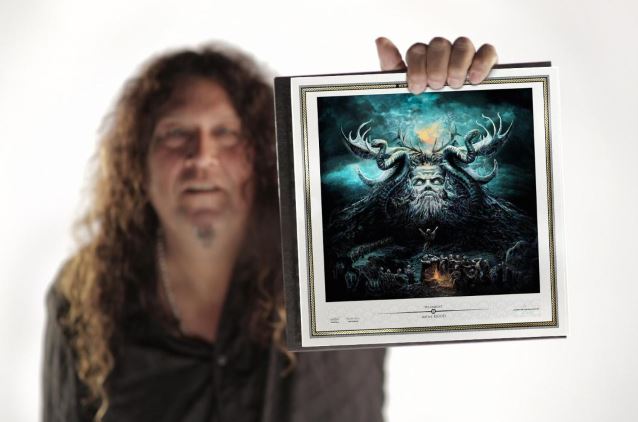 San Francisco Bay Area thrash metal veterans TESTAMENT are giving fans a chance to own shares of the song "Native Blood" from the band's 2012 album "Dark Roots Of Earth".

Before now, the only people who owned songs were music industry insiders. Now, TESTAMENT and the New York Rock Exchange are allowing you to have a piece.

When you buy a share, you'll become a co-owner of "Native Blood" along with singer Chuck Billy, guitarist Eric Peterson, and the band. Not only does this give you the ultimate in bragging rights, you'll also get exclusive shareholder rewards not available to anybody else.

Unlike vinyl, CDs and MP3s, only a limited number of shares will ever be released. There's no better way to own a piece of TESTAMENT's history, and be a part of their future.

"The song is the heart of everything we do," says Peterson. "It's very cool to be able to share that."

"What I feel about [being] one of the first metal bands being offered shares on the New York Rock Exchange, it's actually very exciting for me, being a metal musician of 30 yers, through all the struggles to get metal put on the map," adds Billy. "This is an opportunity to actually get fans around the world to be a part of what I do and what I give out to people and express myself. So I'm very excited to be able to share what my creations are to the world, through the New York Rock Exchange, and get me a little one step closer to all our fans."

Become a TESTAMENT shareholder and get insider exclusives direct from the band. Every "Native Blood" share includes:

* Limited ownership of the song "Native Blood"
* Early access to the new TESTAMENT album coming in 2015
* Invitation to join Chuck and Eric for an exclusive online shareholder meeting.
* Limited-edition print of Chuck's handwritten song lyrics for "Native Blood"
* Foil embossed Certificate Of Ownership to hang on your wall like a gold record

**Important disclaimer**: New York Rock Exchange shares are for entertainment only. They are not securities, and do not provide a financial stake in the music. Your ownership rights are subject to important limitations, and can be revoked.

For more information, visit the New York Rock Exchange and watch the two videos below.