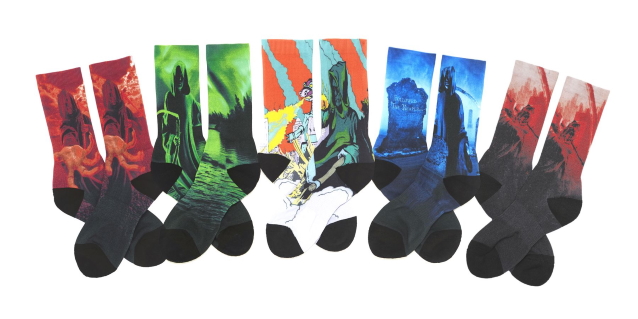 For the first time ever, Finnish metallers CHILDREN OF BODOM are selling an official range of branded socks. The socks offer slight compression paired with CHILDREN OF BODOM's original album graphics.

A short video of CHILDREN OF BODOM drummer Jaska Raatikainen "testing" the band's new socks can be seen below.

Former CHILDREN OF BODOM frontman Alexi Laiho passed away on December 29, 2020 in his home in Helsinki, Finland. The 41-year-old had reportedly suffered from long-term health issues leading up to his death.

Alexi and Jaska founded CHILDREN OF BODOM in 1993, and the band was one of the most internationally acclaimed metal acts in Finland up until their very last farewell concert in December of 2019. Last year, Alexi put together BODOM AFTER MIDNIGHT, which recorded three songs and shot one music video, to be released in April.

Raatikainen, Henri "Henkka T. Blacksmith" Seppälä (bass) and Janne Wirman (keyboards) announced their departures from CHILDREN OF BODOM in October 2019. Two months later, they confirmed that they were the rightful owners of the CHILDREN OF BODOM brand.