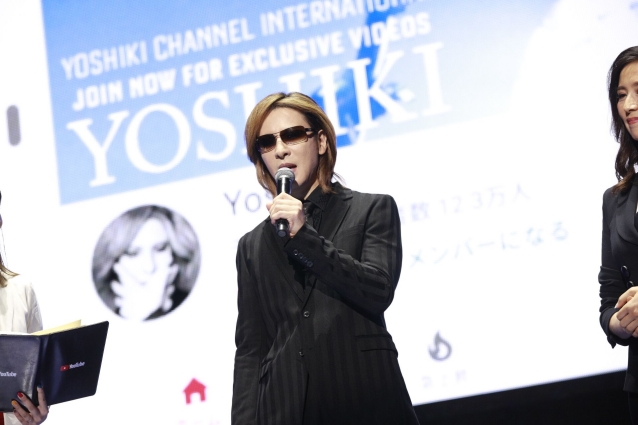 "Yoshiki - Life Of A Japanese Rock Star", a new documentary series, is slated to premiere on YouTube Originals — the global, streaming platform from YouTube where you can discover original series and movies from today's hottest talent — in March, 2020.

"Yoshiki - Life Of A Japanese Rock Star" follows Yoshiki's many facets as a composer, rock drummer, classical pianist, and fashion designer and approaches the sometimes challenging behind-the-scenes reality of when music and passion intersect. "Yoshiki - Life Of A Japanese Rock Star" offers a glimpse into the life of an artist who is active on the global stage. Yoshiki commented that he hopes to inspire viewers as much as possible by discussing "why I became a musician, why I continue to be active, why I continue to exist."

On Wednesday, November 13, Yoshiki appeared as the surprise guest at YouTube's Brandcast Japan 2019, hosted by Google at the Ryōgoku Kokugikan, and it was announced that all six episodes of Yoshiki's documentary program "Yoshiki - Life Of A Japanese Rock Star" will be available for streaming on YouTube Originals starting March 2020.

Watch the trailer for the documentary which was revealed during Yoshiki's appearance at YouTube Brandcast Japan 2019 below.

YouTube Originals develops quality, original content for YouTube's streaming platform such as documentaries, movies, and live events featuring popular artists, creators, and productions from around the world in partnership with YouTube.

"Yoshiki - Life Of A Japanese Rock Star" will be streamed on Yoshiki Channel International.