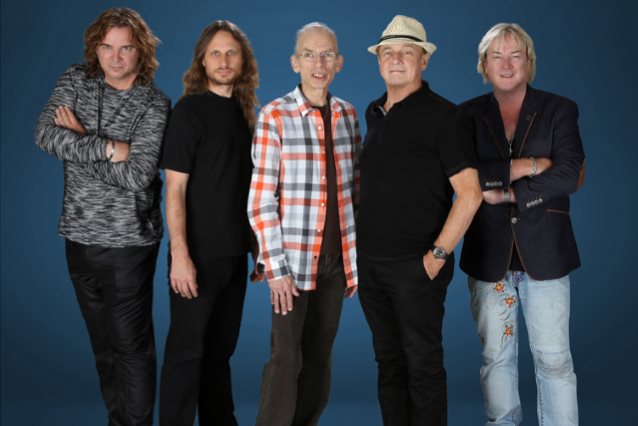 Due to the tragic, unexpected death of guitarist Steve Howe's beloved younger son Virgil, progressive rockers YES have canceled the remaining dates of their "Yestival" tour.

Ticket refunds for the affected tour dates (in Moorhead, Cedar Rapids, London, Rochester, Boston and Huntington) will be available at point of purchase.

The YES members — Howe, Alan White, Geoff Downes, Jon Davison and Billy Sherwood — want to thank all their fans for their support and understanding at this time.

Howe and his family ask for their privacy to be respected.

Virgil, drummer for British power-rock outfit LITTLE BARRIE, played behind the kit, sang and performed keys on his father's 1993 album "The Grand Scheme Of Things".

Virgil's death comes just two months before the scheduled arrival of "Nexus", a new instrumental album on which he collaborated with Steve. The effort is due on November 17 via InsideOut Music.

"I've done a wealth of different things but I haven't done anything like this before," Steve told Prog magazine a few weeks ago. "I feel it's steering me in a different direction. It's a full-on collaborative album, not a duet. It's been refreshing to work with Virgil and we've pulled this beautiful album together. Although it's got shades of mellow music, it doesn't sit still. It moves across electronic music and my guitars. This is an opportunity to discover what Virgil's been doing on the side of his drumming with LITTLE BARRIE. He's got a hard rock and funk side but this has totally different shades."

Founded in 1968 by the late and much-missed Chris Squire and Jon Anderson, Grammy Award-winning recording artist YES has created some of the most important and influential music in rock history, including iconic pieces such as "Roundabout", "Close To The Edge", "I've Seen All Good People", "Starship Trooper" and countless others. The band's albums, including "Fragile", "Close To The Edge", "Tales From Topographic Oceans", "Relayer", "Going For The One" and "90125", have been certified multi-platinum, double-platinum, platinum, and more by the RIAA, selling over fifty million records during the band's long and successful career that has so far spanned six decades.