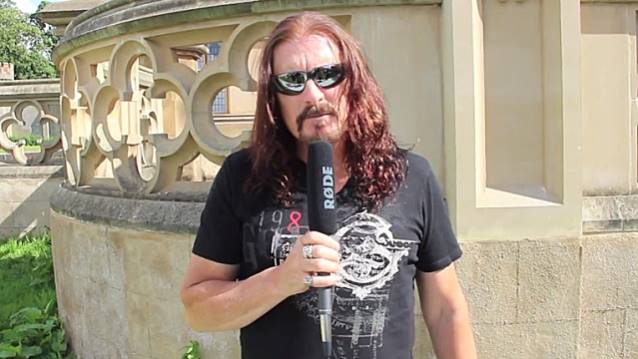 Kerrang! magazine conducted an interview with vocalist James LaBrie of progressive metal giants DREAM THEATER at the U.K. edition of the Sonisphere festival, which was held July 4-6 at Knebworth Park in Hertfordshire. You can now watch the chat below.

Asked if DREAM THEATER would ever playing an "all-request" set the way METALLICA is doing on its current tour, LaBrie said: "We haven't gotten to that point yet. I don't think so. Although we have enough songs that we could do that. It would just probably take a little bit more rehearsals to make sure that we've got all those songs down pat. [Laughs] But I think that's really cool — the fact that they can just pull out any one of their songs from their vast catalog. It would be really cool to do, but, yeah, that's probably later on the road, if ever."

Regarding how DREAM THEATER goes about selecting the songs to perform on each tour and whether they could consider switching the setlist around from one night to the next, LaBrie said: "We have done that in the past, where our sets would differ from each night. I mean, there would be the staples — the ones that we played each and every night — but then there be other ones that we would throw in and kind of mix it up, so that we felt that we were satisfying the fans. But I think, over the years, we've really always been taking that as a priority: What's going on? What's the latest album that we're promoting? And what songs from the previous albums would, more or less, the fans wanna listen to? So it's always something that we're definitely always keeping in mind. But you can only hope that the songs that you did pick are the ones that they're gonna be content with. And so far, I think it's been great."