In recognition of a music genre that has spawned some of the most original and talented bands hailing from every corner of the globe, Earache Records has announced the release of "Worldwide Metal".

Celebrating the diversity of metal in all of its forms, "Worldwide Metal" is the ultimate collection of the fastest, heaviest and most brutal metal tracks to rock this planet. Offering five CDs of pure metal mayhem plus a fully playable PC game — all for the price of one CD — this collection consists of over 80 tracks from some of the most legendary and inspirational bands of all time.

On top of having over five hours of extreme metal on five CDs, "Worldwide Metal" also includes a fully playable PC version of "Earache Extreme Metal Racing"! Originally released on the PlayStation 2 games console, "Earache Extreme Metal Racing" blasts its way onto PC for the first time and remains the first and only death metal-themed computer game. In this full game, ten Earache bands race their vehicles in a gruesome fight for supremacy. One or two players crush and kill their way through totally twisted racetracks to the soundtrack of three hours of ear-splitting death metal and grindcore, with rare video clips included as unlockable bonus content.

Perhaps one of the best things about this killer collection is the price — this box set of five CDs plus a PC game will be sold for the price of just one CD! Due to be released on November 24, "Worldwide Metal" is the perfect purchase for any collector and an ideal Christmas present for any self-respecting metalhead.

Pre-order your copy now at this location. 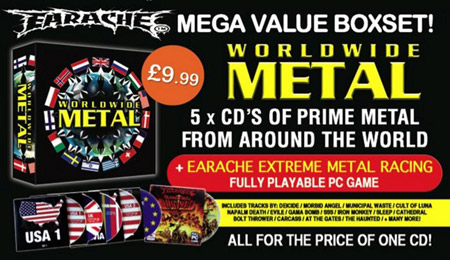