The 1980s were a decade of unprecedented decadence. Wall Street was booming, cocaine was the chic drug of choice, and L.A.'s notorious glam metal scene was in full swing on the Sunset Strip. Ruling that scene were the heavy hitting hair bands and the women who loved them. Narrated by former "Cherry Pie" video girl Bobbie Brown, "VH1 Rock Doc: Do It For The Band: The Women of the Sunset Strip" premiering Friday, April 3 at 11 p.m. on VH1 and Saturday, April 4 at 10p on VH1 Classic tells the story of the mistresses of metal — the women who played a big part in the L.A. rock scene but never got any credit — until now. These are the girls who sacrificed everything for the band — they clothed, bathed, fed, housed, and loved rock stars like Tommy Lee, Nikki Sixx, Slash, Axl Rose, Blackie Lawless, Jani Lane and many others. Viewers will get a first hand look at what it was like to live life in the fast lane as the women reveal secrets and share stories about a time when the only rule was that there weren't any.

These women, who played pivotal roles in the lives of these male superstars, reveal never-before-shared secrets and stories delivered with candid alacrity like only retired strippers/showgirls turned present-day PTA moms can. We'll hear from:

* Adriana — former 7th Veil stripper, who dated Steven Adler, and was de-crabbed by Axl. She later saved Axl's life when he O.D.'d the week before "Appetite for Destruction" was released and went on to sleep with him in the studio one day as the guys wanted sounds of live sex to mix into their album;

* Gaby Gaby Hey, also a former stripper, who kept socks, cigarettes and booze on hand for the guys who would crash at her pad. Every Friday night they'd toss her apartment furniture over the balcony into the pool below then eat her poor man's spaghetti (noodles and butter);

* Pamela - a music video girl, saved Tommy Lee's life at the Flynt Mansion only to watch him get up the next morning and swill a whole bottle of Jack Daniels. Not long after, Pam became a born-again Christian and prayed hard the night Nikki Sixx O.D.'d and watched in relief as he also "resurrected." 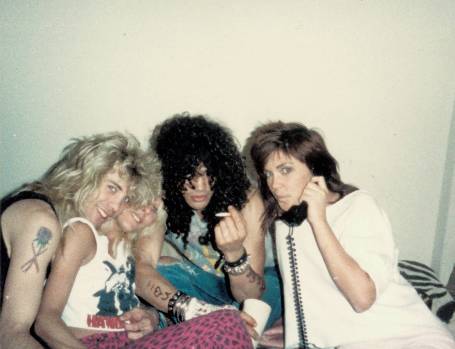