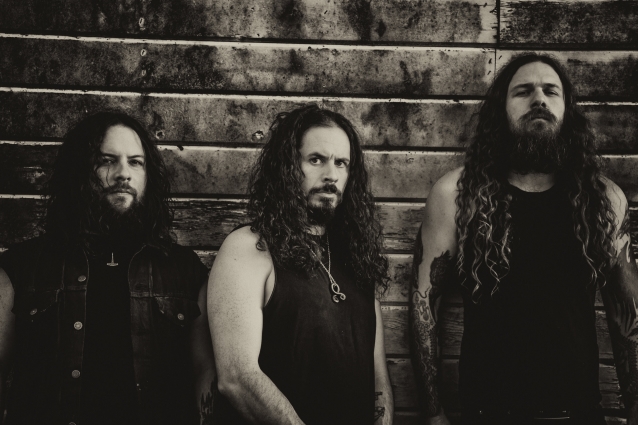 Century Media Records has announced a partnership with WOLVES IN THE THRONE ROOM and the band's label Artemisia Records to release their upcoming albums in the world outside of North America. The Olympia, Washington-based group just finished an U.S. tour with BEHEMOTH and its new labelmates AT THE GATES and will conquer Europe with the same package in early 2019.

Jens Prüter, head of A&R at Century Media in Europe, comments: "I'm a fan since I first saw them at the Roadburn festival in 2008. I love how they have developed their own identity of Cascadian black metal. The Pacific North West of Cascadia might bear similarities to the Norwegian origins of black metal but they went their own path to create a musical vision beyond genre definitions — which earns them my biggest respect. I am looking forward to accompany them on their future endeavors!"

Tomas Lindberg (AT THE GATES, THE LURKING FEAR) also wants to welcome his new labelmates. "WOLVES IN THE THRONE ROOM is a band that I have always respected and held in high regard, due to the amount of ambition that goes into their work," he said. "I feel a real kindred spirit when I dive into their albums, this melancholic desperation that carries a heavy weight of honesty is right down my alley. Having shared stages with them all across North America this winter just made me more of a fan. They put so much effort into everything they do and are very sincere in their art. I was super happy to hear that we have now also become labelmates here in Europe! That means that they are in good hands and also that I can keep easier track of their doings. Congratulations WOLVES IN THE THRONE ROOM, congratulations Century Media Records Europe!"

Founded in 2002 by the brothers Aaron and Nathan Weaver, WOLVES IN THE THRONE ROOM re-imagines black metal as an ode to rain storms, wood smoke and the wild energies of the Pacific Northwest. Their first studio album, "Diadem of 12 Stars" (2006), was a genre-dissolving classic that created a melancholy and psychedelic Cascadian atmosphere. Since that time, they have become one of the most potent and highly regarded bands in extreme music. The listener encounters crystalline metal riffs and ritualistic laments that sing of endless rain falling upon ancient cedars. Their music is a doorway into a mythic ethereal heathen landscape entered through music, magic and dreams.

At the dawning of their latest album "Thrice Woven" (2017), longtime touring guitar player Kody Keyworth was welcomed as a full band member. The album received high praise from the press and the band received the 2018 Metal Hammer Golden Gods award for "Best Underground Band."

WOLVES IN THE THRONE ROOM is: