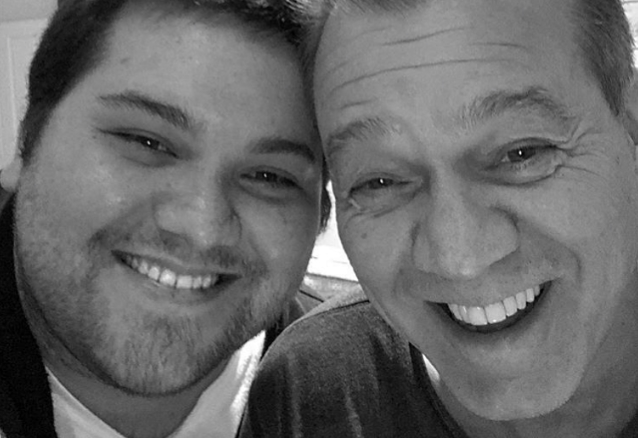 Wolfgang Van Halen has posted a heartfelt and emotional message addressed to his father, Eddie Van Halen, exactly a month after the legendary guitarist's death.

Earlier today, Wolfgang shared a personal black-and-white snapshot of him smiling at the camera with his father, and he included the following note: "1 month.

"Not a second goes by where you're not on my mind.

"It's really hard being here without you."

The 29-year-old VAN HALEN bassist broke the news of Eddie's death on October 6. In an emotional post, he wrote: "I can't believe I'm having to write this, but my father, Edward Lodewijk Van Halen, has lost his long and arduous battle with cancer this morning. He was the best father I could ask for. Every moment I've shared with him on and off stage was a gift."

Wolfgang's mother is actress Valerie Bertinelli, who was married to Eddie for 26 years. The couple split in 2002 and officially divorced in 2007. Eddie then went on to marry Janie Liszewski in 2009.

Eddie died at St. John's Hospital in Santa Monica, California at the age of 65. Wolfgang, Valerie and Janie were by his side, along with Alex, Eddie's brother and VAN HALEN drummer.

Wolfgang has been a member of VAN HALEN since 2006, when he replaced bassist Michael Anthony. He contributed to VAN HALEN's final studio album, 2012's "A Different Kind Of Truth".