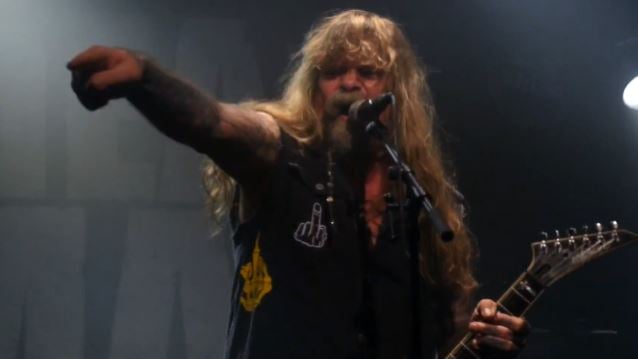 Jimmy Kay of Canada's The Metal Voice recently conducted an interview with former W.A.S.P. guitarist Chris Holmes. You can now listen to the chat below. A few excerpts follows (transcribed by BLABBERMOUTH.NET).

"It was great. Tony [Richards, drums] got thrown out. [Steve] Riley came in [on drums], and it seemed like it was all for one, one for all — everybody worked for the same goal. But deep down inside, Blackie [Lawless, W.A.S.P. mainman] had his means of controlling everything. Being the only is what he's always wanted to do; he doesn't want to work with other people. Obviously, the second album, [1985's] 'The Last Command', he's on the cover, and it's all about him, him, him."

On what he thinks he brought to the first two W.A.S.P. albums:

"In the younger days, we always think the guitar sound is the guy's amp or his guitar. But that's the way he plays; it's in the guy's hands. It's the way that I grew up playing guitar is the way I play. And you can hear on the latest W.A.S.P. albums, it's not there. I don't know what it is; it's just the way you hit the strings. Everybody's different. [Tony] Iommi, Michael Scheknker, Peter Townshend… Everybody that plays is just different, the way they hit the guitar. And I hit a certain way. And Blackie always… I never heard one note in my life in W.A.S.P. 'Hey, Chris, you did a good job.' I never heard that once. I always heard how terrible I played and this and that.' I was always put down all the time. And Blackie says, 'The manager wants to use my image to sell the band.' Well, the band was a band in the first place; it was a whole unit. But he always wanted to be the main guy."

On whether Blackie was made that Chris was drinking heavily:

"He was always mad I drank, but that was the only friend I had on the road — that bottle. It was part of my first personality. At the time, I loved drinking. I loved all the stupid things you do drunk and you blame it on being drunk. You wanna know the honest thing about it? He was jealous of me. When I married with Lita Ford, she was nominated for 'Vocalist Of The Year,' and he made sure I couldn't go to the music awards. He made sure I couldn't go, and I didn't go. It was gonna cost me a large amount of money and I just… The year before, I went, and she had me wear a white suit, and I can remember him telling me after the show… I didn't look at it; I didn't even tape it. But he goes, 'Oh, you had to wear a white suit. You stuck out like a sore thumb.' I didn't even think about it. I guess I did. But he watched it. He didn't like it 'cause he wasn't there."

On whether he would do things differently in W.A.S.P. if he had a chance to go back in time:

"I wouldn't have joined it. If I could change back time, I wouldn't have joined it… knowing now what I know. I was told I was written in as one of the songwriters, and I found out about five years I was written in as a session player. I trusted somebody. What they said, I took it as a hundred percent [truth] and I trusted them. Phil [Taylor, former MOTÖRHEAD, who worked on Holmes's 2013 album, 'Nothing To Lose'] dug into the contracts. A lawyer in London went into the publishing stuff to find out who the publishing went to, and he found that for the first, second, third, fourth, fifth album, I was written in as a session player, but my name's on the record as a songwriter. But I could never find that out; the contract stuff. That's just the way it is."

On why he was drinking so heavily in the infamous scene in the "The Decline Of Western Civilization Part II: The Metal Years" movie in which he can be seen guzzling vodka in his pool:

"Well, first of all, I think I drank 'cause I was an alcoholic. Didn't she [filmmaker Penelope Spheeris] ask if I was trying to hide something? It was being in W.A.S.P., being treated the way I was being treated all the time. You've gotta understand, if somebody uses reverse psychology on you to hold you down, so you don't shine like they do. I was always held down all the time. Anything I did, I was always in trouble. Everything I did, I was always in trouble in W.A.S.P., no matter what. Every bad thing that happened in W.A.S.P. was my fault, which, most of the time, it wasn't."

On his final departure from the band in 2001:

"As far as I know, I was in the band and they were getting ready to tour. I wouldn't get paid when we were off the road. And Blackie owed me some money from [1999's] 'Helldorado', and I needed to get paid. And he just says, 'Meet me at Stet's.' That was drummer [Stet Howland]; he had a drum-rehearsal room in the Valley. So I'm down [there] and waiting. And Blackie, I thought he would have a check for me; I needed the money. He walks in with a piece of paper, and he goes, 'Did you say this, Chris?' He was really pissed off. I go, 'Let me read it.' So I was looking at the paper. It was [a letter from] a fan. We played a place called Harpo's, and it was the fan who wrote, 'I got everybody's autograph except Blackie's.' [When he was] by the backstage door, the security pushed him away and Blackie ran on the bus. The bus started up and everybody was getting on to go. And he says, 'Chris was one of the last guys to walk on the bus. I asked Chris if I could have Blackie's autograph.' Chris said, 'No.' I asked, 'Why?' And he said, ''Cause he is an f-in' a-hole.'' And I read that. And I told Blackie, 'Yeah, I said it.' And he kind of goes, 'I thought we had a better understanding of each other.' And I go, 'No, no, no, no.' I explained to him why I said it, and he just… at the end of the story, he just walked out of the room. And at that time, they had already tried out Darrell [Roberts], the other guitar player. I didn't know. And that was the last time I ever saw him."

On what he thinks about W.A.S.P.'s sound today:

"I was Halloween night in L.A. once… I don't know, probably eight years. And my friend was opening for W.A.S.P.; he gave me a ticket. So I dressed up as a terrorist to go see [the show], so nobody knew it was me. And I went and saw it. And I watched the first five songs, and they were using the same samples CD that I played a few years before — the exact same show. And I hate to tell you, it had no energy and it was a joke. Without Jimmy Page, LED ZEPPELIN doesn't work, right? Without Peter Townshend, THE WHO doesn't work. Without Tony Iommi, BLACK SABBATH's not gonna work. Without Michael Schenker, UFO doesn't work. Without George Lynch, DOKKEN ain't happening. So without Chris Holmes, W.A.S.P. ain't gonna be happening. It's gonna be W.A.S.P., but it's not gonna have the energy."