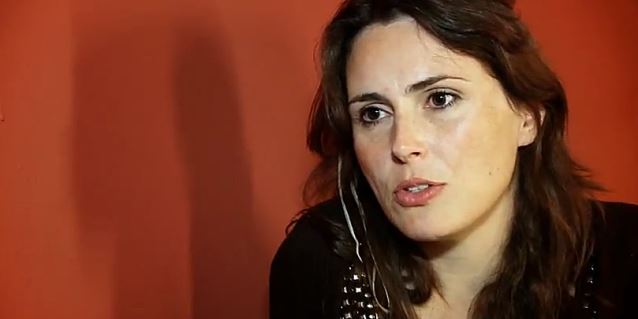 Iñigo Dominguez Diaz of Spain's GoetiaMedia.com conducted an interview with singer Sharon Den Adel of Dutch symphonic rockers WITHIN TEMPTATION on August 30 at the En Vivo festival 2013 in Bilbao. You can now listen to the chat in the YouTube clip below.

On September 27, WITHIN TEMPTATION will release the "Paradise (What About Us?)" EP and promotional video, featuring a unique collaboration with classically trained Finnish rock diva, former NIGHTWISH singer Tarja Turunen, guesting on the title track.

Comments Sharon Den Adel: "When we had written the first version of 'Paradise' and listened back to the demo we'd recorded and the epic power of the song, we thought of Tarja instantly. How well this track would fit her classical voice and how extra special it would be if we sang it together. The more we thought about this wild idea, the more excited we got about it!"

For the first time, WITHIN TEMPTATION has also decided to give fans a very intimate insight into how they capture their song ideas early on. The EP will contain three additional tracks — demo versions of brand new songs intended for the forthcoming album. The demos include "Let Us Burn", "Silver Moonlight" and "Dog Days". Despite the demo versions missing intended symphonic, orchestral sounds and a finished mix, the powerful energy surging through the tracks can be heard right from the start.