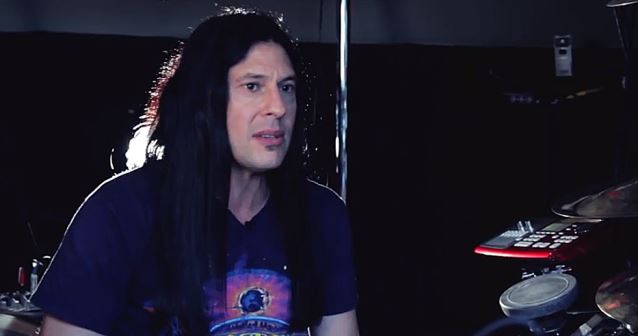 MusiciansFriend.com recently had the chance to visit drummer Mike Mangini of progressive metal giants DREAM THEATER at his home studio in Massachusetts. Mike talked about his early drum kits; the evolution of his current setup; and his relationship with his sponsors (Pearl, Remo, Shure, Vater, Zildjian). Check out the footage below.

DREAM THEATER's new, self-titled album sold around 34,000 copies in the United States in its first week of release to debut at position No. 7 on The Billboard 200 chart. The CD arrived in stores on September 24 via Roadrunner.

The nine-track "Dream Theater" disc was recorded at Cove City Studio in Glen Cove, Long Island, with Petrucci producing and Richard Chycki engineering and mixing. It's the band's second album with Mike Mangini, and the first one on which he was a part of the writing process from Day One.