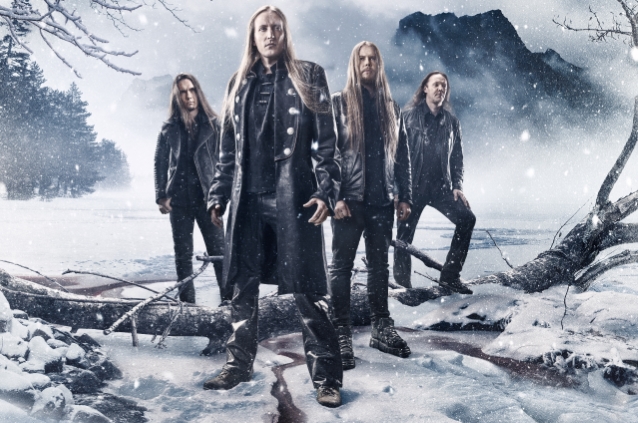 WINTERSUN guitarist Teemu Mäntysaari recently spoke with AntiHero Magazine. The full conversation can be viewed below. A few excerpts follow (as transcribed by BLABBERMOUTH.NET).

On the new, as-yet-unreleased song they're performing during their current North American tour:

On the song's availability:

On the band's upcoming plans:

Teemu: "The touring period stops in November. We're going to do still a few European shows after this tour, and then we'll have, like, a half-year break, so we're going to concentrate on doing some new music [and] planning the next crowdfunding campaign. Then it's going to be stopped for a moment next summer from May until August. We'll be doing 15th-anniversary shows where we play the first album from the beginning to the end — mostly festival shows in Europe, but hopefully some club shows in between as well. Then we're going to again go [into] a bit of hibernation mode, and continue working on new music and new ideas for the crowdfunding planning and all that."

On the pace at which the band records:

Teemu: "It does take more time than most bands would take, but we're trying to work our methods and the recording process to the point where it would take less time. Usually, getting the ideas and the music is actually the easy part, but then being able to deliver it the way that we want, getting the sounds that we want, the production, that's the harder part. That's what we are working towards with the crowdfunding."

On the musical direction he expects the group's new material to take:

Teemu: "If you take a look at the three albums we have so far, each of them is a little bit different, but they still have the recognizable WINTERSUN sound, the core sound. I think we're trying to keep that, but we don't want to put too much limits on the future albums. We've got some new music that is very similar style, but there's some new ideas for new album themes that are more futuristic, and some are more kind of old-school. There's different projects that we've been thinking about, and we're not sure which one is actually going to be the next, but we don't want to put too many limits — we want to leave it like we can do anything under the name WINTERSUN."