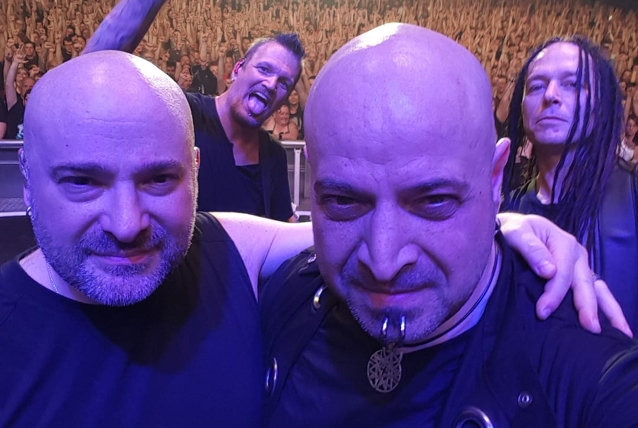 A DISTURBED mega-fan and David Draiman lookalike was invited to join the band on stage during last night's (Wednesday, May 15) concert in Manchester, England.

Draiman plucked Carlos Pau-Real from the crowd at the O2 Apollo after noticing the Portuguese native's familiar appearance, complete with the double labret talons which were synonymous with David's image prior to the release of last year's "Evolution" album.

DISTURBED joked about the encounter by posting several photos on Facebook and captioning them: "Will the real David Draiman please stand up?"

DISTURBED will return home this weekend for festival shows in Columbus (Sonic Temple Art & Music Fest) and Oklahoma (Rocklahoma), then head back overseas for another slew of dates, including multiple concerts in Russia.

DISTURBED recently announced a much-anticipated second leg of arena shows set to begin July 21 at the Mankato Civic Center in Mankato, Minnesota. The band is touring in support of "Evolution" (Reprise Records), which hit No. 1 on Billboard's Top Alternative Albums and Top Rock Albums charts, as well as No. 4 on the Billboard 200.