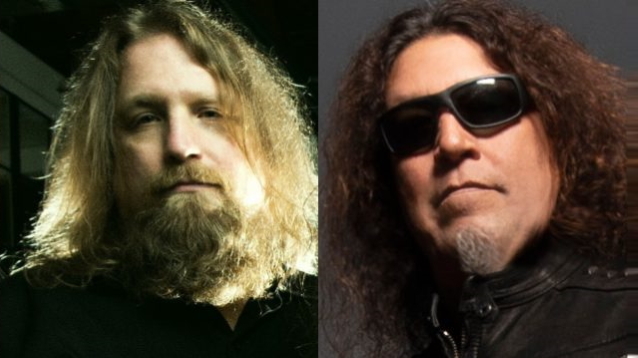 Will Carroll says that he is "cool" with Chuck Billy, two months after the TESTAMENT singer publicly wondered if he had contracted COVID-19 from the DEATH ANGEL drummer when the two bands toured together.

Carroll, who spent almost two weeks on a ventilator in an intensive care unit at a Northern California hospital, told San Francisco's KRON-TV that he "knew" he had been infected with the coronavirus while he was still in Europe.

"Halfway through the tour, people started getting sick and it started spreading from one person to the other," the drummer said. "Once I did get sick, the third or fourth to last day [of the tour], it hit me pretty hard and I knew I probably had COVID. I just knew it."

This past April, Billy was asked by Hot Metal if he was aware that Carroll and some of the other members of DEATH ANGEL were "quite ill" while they were still on the road in Europe, Billy said: "No. Because it was the last three days, I think [Will] said, of the tour [that he first started feeling sick]. But no, he didn't say he was sick or had it or thought he had it, but, you know, I think he should have said something. Unfortunately, I don't think it was cool… I mean, he could have got stuck in Europe for a long time. With his problems, he could have been on a ventilator in Europe… But, again, to think that he was ill, just to get on that plane and spread it himself if he was contagious, that's kind of… a little wrong."

Billy was then asked by Hot Metal whether he has any idea how he might have contracted COVID-19. He said: "I don't. But being the band, we are amongst ourselves — the three bands," referring to TESTAMENT, DEATH ANGEL and EXODUS. "We really didn't go and walk through the crowds or nothing. So we were isolated to ourselves. So if Will did get us sick, maybe it was that last hug on stage, that last show when Will was around us all. I don't know — if he thought he was really ill at that point. Because we didn't have a lot of public interaction with each other — it was mostly just all three bands and crews. So, we don't know. It could have been that last night. Or it could have been at the airport, because some of the people on the bus didn't get sick, who slept in the same areas with us and were really close to us. So maybe we got it at the airport that last night. Maybe we got it on the plane coming home. We just don't know… But we do know that we all came down [with it] around the same time. I think if Will was sick first, if they were sick first, maybe they must have gave it to us — I don't know — but the rest of our band and crew started feeling it, like, a day after we got home."

Carroll addressed Billy's comments during a May 26 chat with Rock Immortal Productions' "Rock Talk" live interview series. He said (see video below): "It was the last two days of the tour, and I just thought I had like a tour cold or a tour flu or something. It didn't really get serious until the flight home when I started breaking out in sweats and I had terrible fever that I started thinking, 'Oh, I might have the virus. I feel really terrible.' So it didn't really cross my mind to let people know. But I was taking precautionary steps, like I wasn't hanging out after those last couple of shows. I wasn't part of the afterparty or hanging out backstage. I was going straight to the bus and going to my bunk and sleeping. I stopped drinking."

Asked what the first symptoms were when he started getting sick, Carroll said: "Achy muscles and just lack of energy, kind of. Oddly enough, though, I guess 'cause my endorphins were kicking in, it didn't affect my performances; I was able to play drums and perform like I normally do. But after the show, I would crash right back down and feel weird."

According to Will, he has since talked to Chuck, and there are no hard feelings between them.

"I was a little surprised when I saw the article, and I contacted him right away via text message, and we went back and forth, and everything's cool," he explained. "I read the full article that Chuck's [quotes were] taken from on Blabbermouth. It was kind of taken out of context… So, if you read the whole interview from the original [source] — it was for some metal 'zine or something — it didn't come out bad the way it did on Blabbermouth; it didn't sound like he was slamming me. But, like I said, I was surprised when I saw it, and I did contact him. We're all cool — I love Chuck and I love Tiff [Chuck's wife Tiffany], and we always have a lot of fun on tour together, and I look forward to doing more tours with them."

Carroll added; "Fuck Blabbermouth. [Laughs] When I contacted Chuck, he had no idea what I was talking about. I was, like, 'Well, did you read Blabbermouth?' And he's, like, 'I don't read that site.' [Laughs]"

Hot Metal's entire interview with Billy can be heard at the magazine's Patreon pay site.

Billy was one of the first metal musicians to test positive for COVID-19, the disease caused by the new coronavirus. Chuck later revealed that TESTAMENT bassist Steve DiGiorgio was also diagnosed with the disease.

EXODUS guitarist Gary Holt, whose band was also on "The Bay Strikes Back 2020" tour, tested positive for COVID-19 at the end of March.