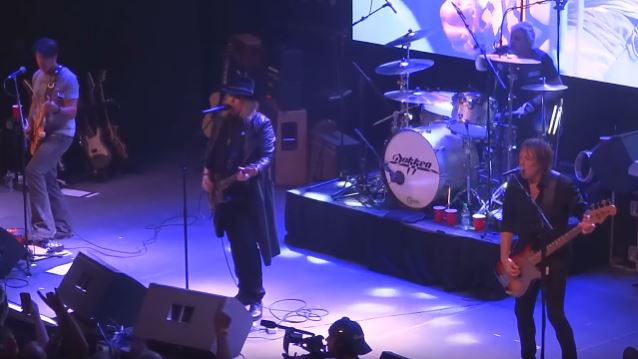 Although DOKKEN had originally intended to perform a brand new song at the Sioux Falls concert — with plans to include it on the band's upcoming DVD — those plans were eventually abandoned. "There's a couple of reasons for that," Pilson told the KBAD 94.5 FM radio station prior to Friday's gig (see video below). "For one thing, it's not finished. But the music is done, and the music is great. It's a rocker. It's great. I mean, it really came out fabulous.

"George and I had done some music several weeks ago, and we sent it to Don, and Don said, 'Why don't you guys speed it up? Wanna try speeding it up?' So we did, and we all loved it. And we really do all love it, which is kind of hard in itself. So that was great. Anyway, then [Don] started writing some lyrics for it, and he sang me some stuff over the phone. It sounds like it's gonna be really good. But because it's not done, we're probably not gonna play it at these shows or in Japan. But we are filming, as you must know — we're filming on Friday — and we're gonna be recording a live DVD and live CD. So the plan is to go in the studio and finish the track and have it as a studio bonus on the live DVD — a new DOKKEN track."

Pilson told Ultimate Classic Rock in a separate interview that the new DOKKEN song was "very DOKKEN-sounding. It's very tricky to try and come up with something that sounds authentic but sounds sincere, and I think we did it. We kind of just let all go and let our inhibitions fly and it came out."

Don also revealed another reason for why the new DOKKEN track wasn't completed in time for the Sioux Falls show. "I've been super-busy and I've been trying to write lyrics," he explained. "The song really hasn't spoken to me as much, so I let Mick take a crack at it. Mick wrote an entire lyric and the whole song and it's really good, but it's too high. It's just out of everybody's range. So that needs to be taken into consideration. I think it was written in the wrong key for me. You'd have to either sing really low, and it wouldn't sound good, or like super-high, and I'm stuck in the middle. Jeff and I are going to try to get together." He added: "I've got some alternative ideas that I think might be even better [for the new song], like more of an anthemic up-tempo 'Paris Is Burning' kind of song. It's not going to be hard; Jeff and I are kind of on the same page — we were cut from the same cloth as far as our likes, BEATLES, THE HOLLIES."

Dokken, Pilson, Lynch and Brown will launch the Japanese tour on October 5 in Osaka, before heading to Fukuoka, Tokyo for an appearance at the Loud Park festival and continuing on to Hiroshima, Aichi and finally, back to Tokyo for the final show on October 12.

While offers from tours to festivals have been pouring in since the reunion shows were announced, Don is adamant that the upcoming shows will be it for the band.

"My manager is getting hit up every day for pretty large sums of money to play festivals next summer, all over the world. But I had to say no," he explained to Billboard. "I love the band I have now; We've been together for 13 years, and I don't want to hurt that franchise. Plus if we were to continue with [the classic] lineup, old wounds might be opened, and I don't want to revisit that. I don't think any of us wants to. It's all great when a marriage fails and you say, 'I'm gonna get back with my ex' — for a week, maybe. Six months into it, the wounds come back. I don't want to experience that. It's just not part of my life anymore, and I think the other guys feel the same way. So this will be enough." 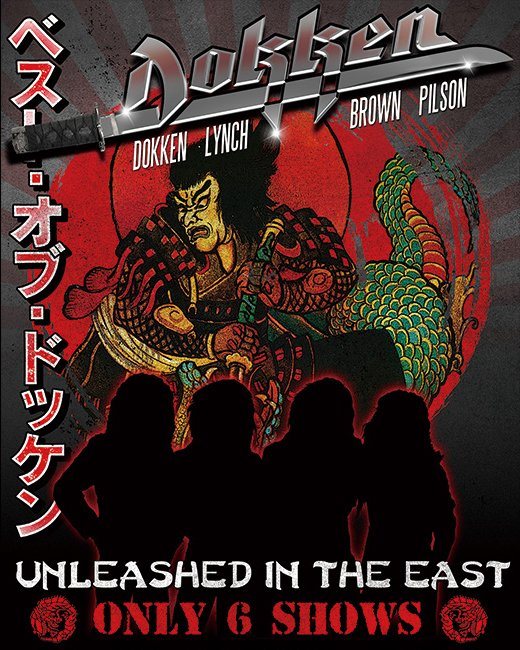