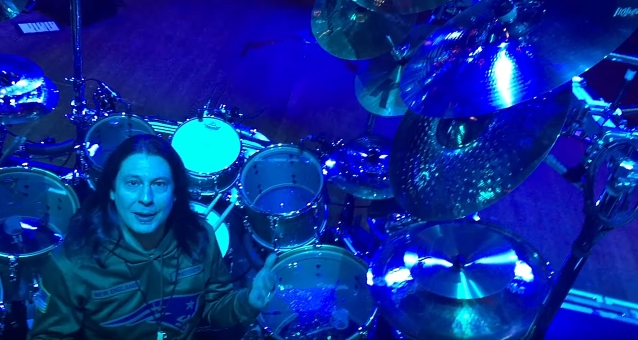 DREAM THEATER drummer Mike Mangini has uploaded a new video to his YouTube channel in which he explains why he sets his cymbals so high while performing live. He says: "I'm getting a lot better isolation for sound; they're more up out of the way out of James's [LaBrie, vocals] microphone; and they're actually close in, so I can feel it in my traps and down my back. But it's not injury pain — I'm actually getting a lot stronger, and it feels great. So that's really the purpose. It's a sonic thing. Also, it's a look thing, because I can see everybody; there's just more space for me. So there you go. That's why they're up high."

During a recent interview with Metal Wani, DREAM THEATER guitarist John Petrucci said that there are "a couple of reasons" Mangini likes to set his cymbals at a high level. "Being the caring person that he is, I think Mike originally raised the cymbals out of the way so they wouldn't interfere with James on stage," he said. "Like, the cymbals were right at his head level. So I think part of the reasons why he pushed them out of the way was to help out James. And the other reason, if I'm not mistaken, he wanted to create more of a window, more visual access so you can see what he's actually doing."