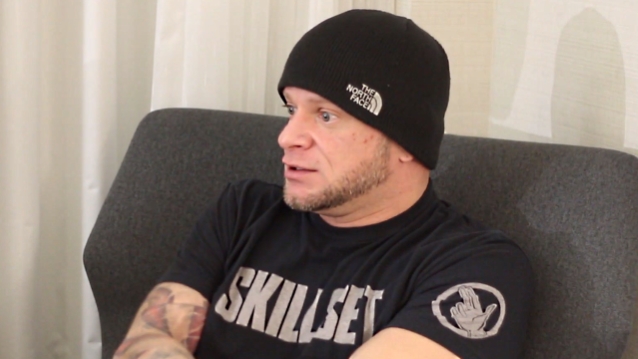 In a brand new interview with Backstage Entertainment, ALL THAT REMAINS frontman Phil Labonte was asked why he always wears hats, both on and off stage.

"Thankfully, I don't have a weird-shaped head, so when I'm out and about in the summertime, I'll have my hat off or whatever," Phil said (see video below). "Onstage, I like the look… There's something 'everyday' about it.

"I'm a bad rock star," he continued. "So dudes that get dressed up in outlandish outfits and paint themselves, I never got that. For me, I was always into the bands that didn't. I was always into METALLICA, because they were, like, 'Man, we just get up there in jeans and t-shirts, same thing that we'd walk around in.' And I was, like, 'That's cool.' Same thing with PANTERA. Those guys always just wore the same stuff that they would wear hanging out. And the same thing with all the death metal bands that I was into. You wouldn't see CANNIBAL CORPSE wearing some big old thing. And when I would see Glen Benton [DEICIDE] up there with football pads that he put spikes on, we would just kind of chuckle and be, like, 'Glen up there.' I'm not trying to talk smack, but, for me, it was never a thing. So I kind of dig… Wearing a baseball cap is a very 'everyday guy' kind of thing. Most of our fans, at one point or another, will throw a baseball hat on and probably go to work. And that's kind of the reason that I like it."

Labonte went on to say that he and his bandmates "don't put a whole lot" of thought into their stage outfits. "I mean, none of us wear eyeliner or makeup or lipstick or facepaint or any of that stuff," he explained. "And there are people out there that do. And [it's] cool. But, for me, it's just never been the way that I want people to pay attention to ALL THAT REMAINS."

ALL THAT REMAINS recently announced the addition of guitarist Jason Richardson to the group's ranks.

Richardson joined ALL THAT REMAINS as the replacement for Oliver "Oli" Herbert, who passed away in October.

ALL THAT REMAINS is continuing to tour in support of its latest album, "Victim Of The New Disease", which came out in November.