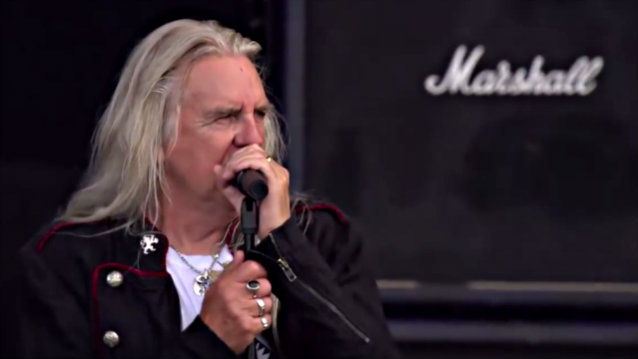 Vocalist Biff Byford of British heavy metal legends SAXON was recently interviewed by Canadian rock journalist Mitch Lafon. You can now listen to the chat below.

Asked why he thinks SAXON never managed to reach the same commercial heights in the 1980s as a band like IRON MAIDEN, Biff said: "I just think that they had a fantastic team around them — and still do have, actually — and I think that made the extra… made it a bit better. I don't think they were surrounded by 'yes men,' if you know what I'm saying, where I think we were surrounded a little bit by fawning 'yes men,' and we lost our way a little bit in the way that we wrote songs and the way we recorded songs. It would have been better if we had stayed with a winning team, if you know what I mean. That's the sort of thing I mean. It's not particularly anything to do with musically or fashion or anything. It's just a matter of… I think they had the right team at the right place at the right time. They really went for it in America, and we sort of probably went about fifty percent for America. You have to remember that we were probably bigger in Europe at that time. It's just how it goes, really. It's just the luck of the draw, as they say."

Byford was also asked why he thinks SAXON had a particularly hard time breaking the American market. He responded: "You're asking the wrong person. I don't know. I mean, we certainly had the songs: 'Power & The Glory', 'Wheels Of Steel', 'Strong Arm Of The Law', 'Princess Of The Night', 'Denim And Leather'… I just think it was the record company and the general team that surrounded us. There's no reason why SAXON shouldn't have been a multi-platinum [band] in America — no reason whatsoever, apart from probably our own naiveté."

He continued: "'Power & The Glory' [1983] was high in the [American] charts, and 'Crusader' [1984] was as well. We just didn't manage to get to the platinum club; that's all. It's as simple as that. But that doesn't mean to say that we don't have a lot of fans in America. I mean, this tour that we're doing now [with UFO], we've just done three and a half thousand people on the West Coast, and it's fantastic. So we have a lot of fans out there, and we have a growing fan base of younger fans as well, so it's great, really. We don't have any regrets."

SAXON recently revealed that the band's forthcoming follow-up to 2015's "Battering Ram" will include a song dedicated to MOTÖRHEAD, called "They Played Rock And Roll".