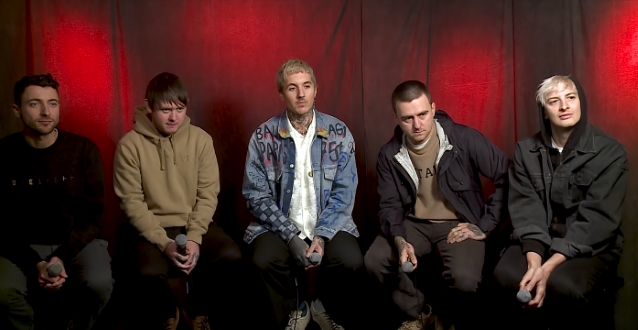 British rockers BRING ME THE HORIZON were recently interviewed by HardDrive Radio. You can now watch the chat below.

Asked why BRING ME THE HORIZON chose to produce its last two albums, 2015's "That's The Spirit" and the upcoming "Amo", on its own rather than use an outside producer, singer Oliver Sykes said: "We tried, and we've used producers and stuff like that, and it's just never worked for us. We've always been so sure of what we wanna do, going in the studio. We produce the music every day. When we write a song, it rarely ever sounds like the same song. It goes through, like 20 or 30 iterations; it changes every day [or] every week. So, by the time we go into the studio, we've produced the hell out of it. I mean, we're so sure that if someone came along… We like constructive criticism and it's nice to get an outside perspective, for sure, but for the most part, we know what we want."

He continued: "There's nothing that glamorous about writing and recording an album. It's just fucking hard work, man — it's just relentless. And that's all you do — you just do it every day — and sometimes it feels like people can get in the way of that. It's not like we [thought], 'We're gonna smash this.' It's just, like, 'We think we can do this on our own and we wanna try it.' And it kind of worked out for us [on 'That's The Spirit']. So, we did it again, I guess."

Sykes also talked about the "Amo" title, explaining: "The album's a bit of a love album, basically. It kind of deals with relationships — relationships starting, relationships ending, relationships we have with other people, or people as a mass, social situations and stuff like that, and social commentary. So, yeah, it's kind of loose concept album on love and stuff. And when I was thinking of the name, my wife's Brazilian, so she speaks Portuguese. So 'I love' roughly translates into 'Amo' and I kind of like the double meaning of ammunition — basically the ammunition for the album and stuff like that. So, yeah, I kind of landed on that."

"Amo" will be released on January 25 via Columbia Records. The band spent the summer writing and recording in Los Angeles, with Sykes and Jordan Fish handling production.

BRING ME THE HORIZON's North American 16-city "First Love" tour will kick off January 23, and will include stops at The Forum in Los Angeles and Hammerstein Ballroom in New York, where a second show was recently added due to overwhelming demand.

BRING ME THE HORIZON is one of the most successful rock bands to emerge from the U.K., selling over two million albums globally to date, playing sellout shows in over 40 countries, including two sold-out nights at London's O2, plus wowing a traditionally non-rock crowd at Glastonbury Festival in 2016.