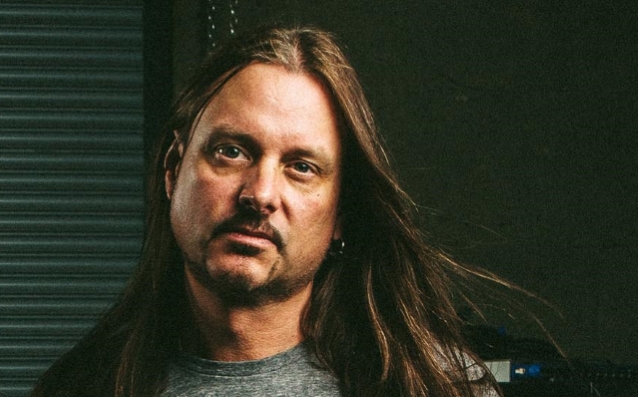 WHITESNAKE and WINGER guitarist Reb Beach says that he has "no problems" with certain rock and pop artists relying on pre-recorded tracks during their live performances.

In recent years, more and more bands have been given a pass for using backing tracks, drum triggers and other assorted technology that makes concerts more synthetic but also more consistent.

Asked by Antihero Magazine if he feels that a reliance on backing tracks is enhancement or cheating, Beach said: "All of us are getting old. A little help is okay with me. As long as it sounds great out there, that's what you want and to see the performers. I have no problems with some enhancements up there. David [Coverdale, WHITESNAKE singer] does; David refuses to use any of that stuff. And WINGER's been talking about it: 'Boy, wouldn't it be fun to get some background vocal running in Pro Tools behind the drum kit?' Or have Rod [Morgenstein, WINGER drummer] get some samples of background vocals, you know, 'cause back in the '80s, we did these huge productions of vocals. And also, it's not like THE ROLLING STONES, where 'I can't get no…', [where] it's just talk-singing. But with us, with WINGER and WHITESNAKE, that stuff is high to sing when you're 60 years old, so you've gotta do things like lower the key, change the key and things. David said he'll never use any kind of recordings."

One musician who has been open about his band's used of taped vocals during live performances is MÖTLEY CRÜE bassist Nikki Sixx, who recently said: "We've used technology since '87." He added the group employed "sequencers, sub tones, background vox tracks, plus background singers and us. [MÖTLEY CRÜE also taped] stuff we can't tour with, like cello parts in ballads, etc.... We love it and don't hide it. It's a great tool to fill out the sound."

In a 2014 interview, MÖTLEY CRÜE guitarist Mick Mars admitted that he wasn't comfortable with the fact that his band used pre-recorded backing vocals in its live shows, claiming that he preferred to watch groups whose performances are delivered entirely live.

"I don't like it," he said. "I think a band like ours… I have to say '60s bands were my favorite — '60s and '70s bands — because they were real, like, three-piece bands or four-piece bands, and they just got up there and kicked it up. Made a mistake? So what? Sounded a little bit empty here or there? So what? It's the bigness and the rawness and the people that developed and wrote the songs and made them and presented them. To me, that's what I really like. I mean, I could put on a MÖTLEY CD and play with it all day long. I don't wanna do that."

KISS lead singer Paul Stanley, who has been struggling to hit the high notes in many of the band's classic songs for a number of years, has been accused of singing to a backing tape on KISS's recently launched "End Of The Road" tour.

Back in 2015, KISS bassist/vocalist Gene Simmons slammed bands who used backing tapes for not being honest enough to include that fact on their concert tickets.

"I have a problem when you charge $100 to see a live show and the artist uses backing tracks," Simmons said. "It's like the ingredients in food. If the first ingredient on the label is sugar, that's at least honest. It should be on every ticket — you're paying $100, 30 to 50 percent of the show is [on] backing tracks and they'll sing sometimes, sometimes they'll lip sync. At least be honest. It's not about backing tracks, it's about dishonesty.