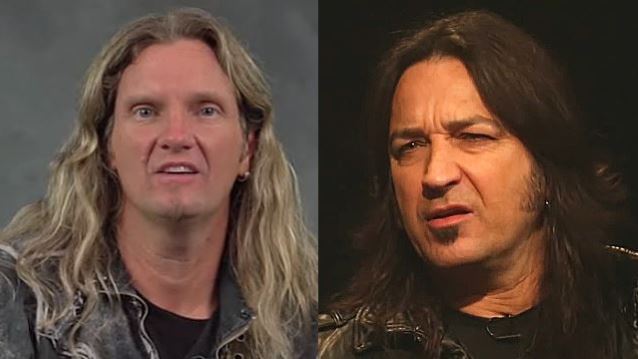 Hoekstra announced the project on the current episode of the "White Line Fever" podcast (download on iTunes), explaining he had built a strong relationship with Sweet while contributing to the STRYPER leader's solo album.

"I just got done laying down some solos for Michael Sweet's solo album and actually he and I are also going to record a project album together that I'm going to write with him," Hoekstra said.

"I'm doing some writing for that now and also three other things in total so I’m writing for four things total right now.

Hoekstra said he was a massive admirer of Sweet, 52, who is also an accomplished guitarist and producer.

"A lot of the guys from the scene are jaded, tired," said Hoekstra, formerly of NIGHT RANGER. "Michael's just a guy who's got his life together and I think a lot of that is via how he goes about living his life on a daily basis.

"But, yeah, I think he is a really talented guy and a nice guy and him and I have always gotten on and wanted to work together.

"The timing didn't work out for his last solo album, so I ended up just kind of miming in a couple of the videos — 'I'm Not Your Suicide' and his duet with Electra Mustaine [daughter of MEGADETH mainman Dave Mustaine], the 'Heart Of Gold' cover. This time I got to play a little bit on the solo album and would have been happy to do much more but I think it would have been weird because we are going to do a whole album together."