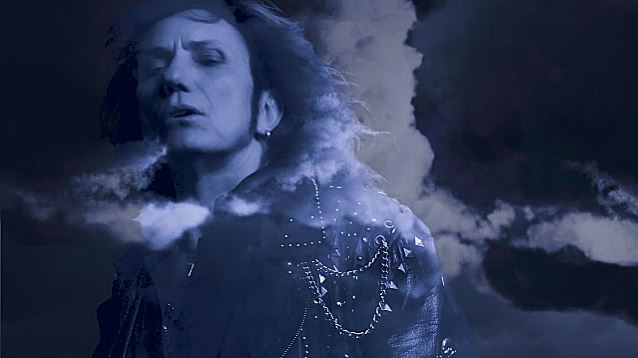 WHITESNAKE has released a short video teaser for a February 25 announcement, which is expected to include details of the band's next studio album. Check it out below.

WHITESNAKE's new CD is tentatively due late March/early April via Frontiers. In addition, the band has shot videos for four songs from the effort, which will be promoted by a world tour, "most likely starting in the U.S., probably in May/June next year," according to WHITESNAKE mainman David Coverdale.

WHITESNAKE's new CD will be the band's first with guitarist Joel Hoekstra (NIGHT RANGER), who was recruited last year following the departure of Doug Aldrich.

Coverdale recently told the "Eddie Trunk Podcast" about Hoekstra: "Joel came with six shiny stars of approval in every aspect of his life, but Jesus Christ, what a player! Yeah, he's incendiary… an amazing musician… truly, truly inspiring… and a beautiful guy too."

He continued: "We pretty much… He was the only guy… We didn't audition him. We just threw him in, we jammed [together] and [told him], 'You want it? You're in.' It was that simple. We just had to keep it quiet out of respect for his colleagues in his former band [NIGHT RANGER], and I respected that 'till the point where it was just starting to get out, and I said, 'You know, you want some front page on this, J., we've gotta pull the trigger.'"

Speaking about the direction of the new WHITESNAKE material, Joel told Myglobalmind webzine: "The only thing that I can tell you is that it is really cool. It's great, straight-ahead rock and roll. Blues-inspired rock that you have known and grown to love coming from WHITESNAKE."

He continued: "We are not going to hit anybody with a formula change and move to smooth jazz.

"Working with David so far has been great; he is just an unbelievably great guy. We get along great, and he is so funny. He puts me at ease and I feel like he just wants me to be myself as a player.

"I am certainly interested in paying homage to all the players that have been through the camp and do my very best to represent historically what made WHITESNAKE so great as well.

"Honestly, a lot of that is still ahead of me. It was really jump immediately into doing this album, so a whole lot of that is just me doing what I do.

"Before the tour [later this] year, when it comes to covering other people's material, is when I will do a lot of shedding on people's styles, if you will."

"I was texting with Doug Aldrich, who is a friend of mine, the night before the news was leaked. He didn't say anything specific to me, but he just said that there was news coming. The next day I woke up, I checked my Twitter and people were suggesting me for a potential replacement for something. I went, 'For what?' I clicked on it and it was for Doug in WHITESNAKE. I thought, "Oh, man, that would be actually a really good fit and be kind of cool.' So just to see what the deal was, I sent off an e-mail to put feelers out and see if there was going to be auditions and anything like that. I did hear back — eventually. [Laughs] Not at first. Then, I think, a couple of well-respected people had put my name forward to David Coverdale. We ended up getting together in late May, just meeting and a little bit of auditioning, so to speak. A little bit of playing on some pre-production. That went fantastic and we got along great, which is always important. Really, at that point he just said, 'Why don't you come back and play on the album in August?' At that point, I just thought, 'Well, we have got this penciled in, more or less, and we will see how it goes.' I just kept things quiet and when I went back out in August, I really started to get enthused playing on the album. I got along great with David and Reb [Beach, guitar] working on that. Reb and I got some great guitar work done together."