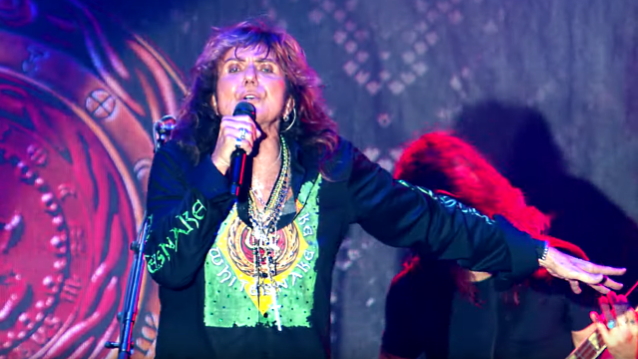 The official music video for the song "Hey You (You Make Me Rock)" from WHITESNAKE can be seen below. The track is taken from the band's latest studio album, "Flesh & Blood", which was released in May via Frontiers Music Srl. The disc follows the 2011 critically acclaimed studio album "Forevermore" and 2015's "The Purple Album", a reimagining of DEEP PURPLE classics from WHITESNAKE mastermind's David Coverdale's time in that band. The 13 original, visceral tracks on "Flesh & Blood", the band's 13th studio album, are, luckily for you dear reader, "all killer, no filler", as the saying goes.

Coverdale stated about "Hey You (You Make Me Rock)": "This album, I'm really happy to say, contains a lot of what I would regard as WHITESNAKE anthems — total into the crowd, easy to remember, crowd involvement, which is what we love with the WHITESNAKE choir. I think this is gonna be a biggie. It's a great audience-involvement song about a beautiful, dangerous woman, of course, which is the very best kind."

Since joining the band four years ago, and just in time for 2015's "The Purple Album", Chicago native Joel Hoekstra has really come into his own, not only as a highly impressive axe-slinger, but also as a very accomplished songwriter too, co-writing six of the songs for "Flesh & Blood" with singer David Coverdale. Of course, Joel's talents are hardly surprising, considering he's the son of two classical musicians.