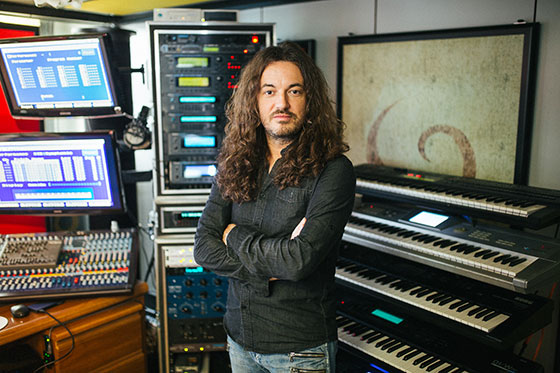 WHITESNAKE has announced the addition of keyboardist/singer Michele Luppi to the group's ranks.

In 2011, Michele became the singer of SECRET SPHERE and released the album "Portrait Of A Dying Heart" the following year. A European tour followed to support the CD, including a show at the 2013 installment of the Wacken Open Air festival. After a successful tour in Japan, SECRET SPHERE released a re-recorded version of the band's 2001 album, "A Time Never Come", featuring the group's current lineup.

Michele is currently working on his solo album and is constantly touring with MLB (MICHELE LUPPI BAND), playing bass and singing all songs from all his previous albums/projects along with some AOR/hard rock classics.

WHITESNAKE will return with its twelfth studio album this spring. "The Purple Album" will be released in Europe on May 15 and in North America on May 19 via Frontiers Music SRL. "The Purple Album" is a re-imagination of classic songs from David Coverdale's time as the lead singer for DEEP PURPLE's Mark 3 and Mark 4 studio albums. The album is currently available for pre-order in various configurations on Amazon: a standard edition, a deluxe edition featuring two bonus tracks, four music videos and a behind-the-scenes featurette on the recording of the album and in a double LP vinyl format. Plans are also underway for a special limited box set edition with memorabilia and merchandise.