WHIPLASH will enter the studio on March 13 to begin recording the band's new albuim, "Unborn Again", with guitarist/vocalist Tony Portaro handling the production duties. Co-producing the effort will be Harris Johns, who has previously worked with CORONER, HELLOWEEN, KREATOR, SEPULTURA, SODOM and VOIVOD, among many others. The band will also document the full recording session and edit the footage into a free bonus DVD.

WHIPLASH will release a 25th-anniversary DVD in late 2009 entitled "25 Years Of Thrash". According to the group, the disc will feature "true stories that cover the band's history with Roadrunner Records and beyond, 1985-1990, 'Power And Pain', 'Ticket To Mayhem', 'Insult To Injury'; The Massacre years, 1996-1998, 'Cult Of One', 'Sit Stand Kneel Prey'; 'Thrashback'." It will also include rare concert footage, photos, interviews, backstage footage and much more. "25 Years Of Thrash" will also "take you back in time, hands on the mixing board in very raw setting as the band shares their experiences of the writing and recording of some of the greatest WHIPLASH albums released to date."

Portaro remained the pillar of the band while the lineup went through many changes over the course of their six full-length CDs, including "Cult Of One" in 1996 and "Sit Stand Kneel Prey" in 1997. During that time, drummer Joe Cangelosi supplied the drumming on "Cause For Conflict" for Germany's premier thrash band KREATOR, which was released in 1995. Portaro handled the guitar work for Billy Milano's M.O.D. on a European tour in early 1998 with drummer Tony Scaglione, inviting the return of the original WHIPLASH lineup for a reunion CD entitled "Thrashback".

WHIPLASH is a three-piece power trio hailing from New Jersey. The band was assembled back in 1984 when Tony Portaro and Tony Scaglione joined forces, recruited Tony Bono on bass and released their first CD, "Power and Pain", in 1985 on Roadrunner Records. The debut CD was followed up by their first live performance at Ruthie's in Berkley, California with POSSESSED and DEATH ANGEL. 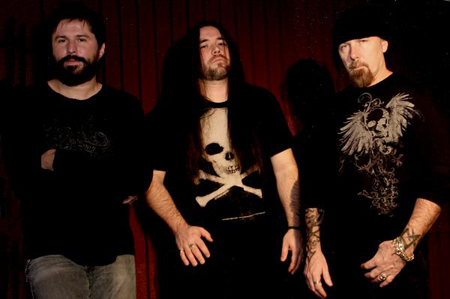