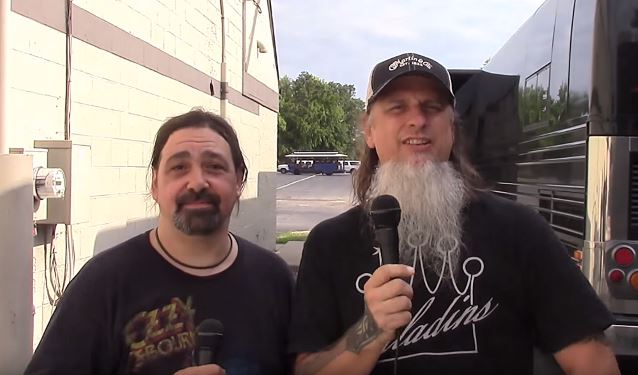 On August 7, The Front Row Report conducted an interview with DOWN drummer Jimmy Bower and guitarist Bobby Landgraf in Ft. Wayne, Indiana. You can now watch the chat below.

Speaking about DOWN's planned follow-up to last year's "Down IV - Part Two" EP, Bobby said: "We're trying to knock it out one a year, is what we're trying to do. So this next one, we should be trying to writing it… when we get finished with these tours. This tour, and SUPERJOINT [featuring Bower and DOWN singer Philip Anselmo] is going out, so… We'll be back together in [New Orleans] probably in November or December… It's coming out, though. We've gotta finish writing it, but it's coming out sooner than the other ones were. Yeah, because it's an EP set, [so] we're trying to get 'em all in."

"Down IV - Part Two" was released on May 13, 2014 via Down Records/ADA Music. The CD was tracked at Nodferatu's Lair — Anselmo's home studio — and produced by Michael Thompson, Anselmo and DOWN.

"He was immediately at home," affirmed Anselmo. "Bobby had always been that guy in case of anything. Knowing his personality, he really locked in with what we do and took it to heart. He made himself belong. Honestly, the first day he came down he contributed a very strong riff to a key song. There's that Southern element, which is imperative. I also catch a real old heavy metal vibe from this record. I can't stress this enough. He took it all on, and he did a fucking awesome job."

Keenan added, "Even with the lineup differences, it's interesting how the songs still sound very DOWN. Bobby and I have always locked in. It's not just physically either, but mentally as well. We see eye-to-eye, and he's been watching for a long time."

"It was a big deal for me," beamed Landgraf. "I drove ten hours up from Texas that first day, cracked a beer, and plugged in. We jumped right into the room, and I played this part. They all smiled. That was the moment for me. I'm a longtime fan, and I knew we were friends, but being a part of the writing and working towards something together was just incredible. As a guitar player, one of my goals was to be in a group like this. I want to make everyone proud."