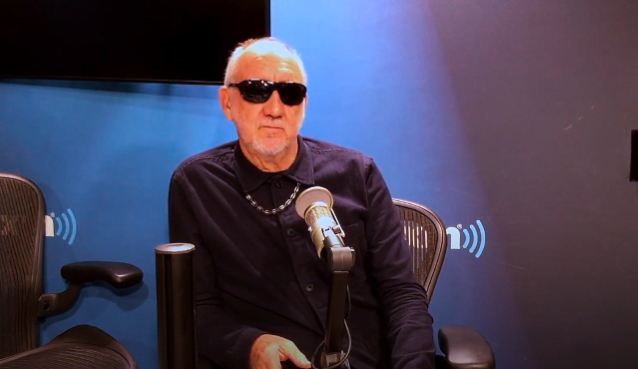 Last fall, THE WHO guitarist Pete Townshend stopped by SiriusXM's Volume (Ch. 106) to discuss the band's legacy and its latest album, "Who", which came out in December. Speaking about THE WHO's current formation, Pete said (see video below): "You know, THE WHO don't exist anymore. We don't go into a studio with me, [late drummer] Keith Moon and [late bassist] John Entwistle and a keyboard player, with me on guitar, and make backing tracks. A song like '5:15' [from 1973's 'Quadrophenia' album], for example, grew out of a studio jam; that's why it's so great to play live. That's not there anymore. It's just me, the songwriter, and just Roger [Daltrey], the singer. And I happen to play guitar, but I'm also damn good on piano, on keyboards and fiddling around the studios and noodling with synthesizers and making new sounds; I can do all kinds of stuff. But that rock band is not there anymore."

This past March, the spring 2020 U.S. leg of THE WHO's "Moving On!" tour was postponed to the fall due to the coronavirus pandemic that is sweeping the globe.

The "Moving On!" tour consists of Daltrey and Townshend with local symphony orchestras as they cross the country.

Among the postponed shows was THE WHO's April 23 appearance in Cincinnati, which was to have added historical significance as it was meant to be the first time the band would perform in the city since eleven lives were tragically lost as they waited to get into THE WHO's concert on December 3, 1979.

Last December, "Who" entered the U.K. chart at position No. 3, becoming the band's highest-charting U.K. LP in 38 years.