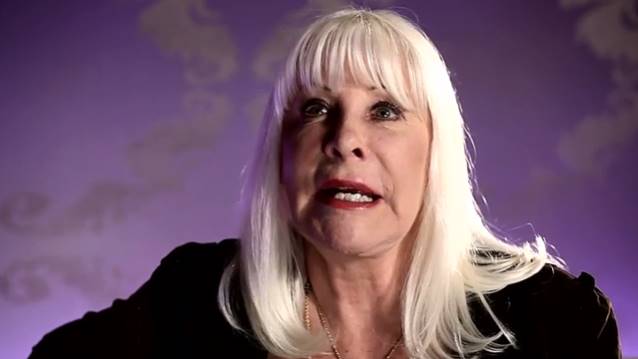 Linda Leseman of LA Weekly recently conducted an interview with Wendy Dio, the wife/manager of legendary heavy metal singer Ronnie James Dio. A couple of excerpts from the chat follow below.

LA Weekly: [Ronnie] was huge onstage. I saw him perform with HEAVEN & HELL in 2008, and he seemed so spry and healthy. I was shocked to learn soon after that he was sick.

Wendy: I know. Stomach cancer is very hard to detect...People think they've just got indigestion, and for years, he said, "Oh, I've got indigestion." He'd just take Tums and things. We had actually gone to a specialist, and if I knew what I know now, I would have made sure that he'd had a colonoscopy. But, at that time, the specialist was just worried about his heart, and he did some heart exercises, and everything went fine with that. [The specialist] said, "I think it's just a gas bubble. You'll be fine." Had I known what I know now, I would have insisted he have more tests.

LA Weekly: Do you feel like Ronnie's still around?

LA Weekly: Have you had any sort of supernatural encounters, or is it just a feeling?

Wendy: Sometimes it's stronger than others. Sometimes I feel he's right there. Sometimes I hear my name called, but there's nobody there. Maybe it's in my mind. Sometimes I'm looking for something, and I can't find it anywhere, and then all of a sudden it's sitting there. But that could just could be because I haven't looked properly! [Laughs] I strongly believe that you are reincarnated and you can come back until you've done it right, until you've become the ultimate being, and I think Ronnie was at the point of being the ultimate being.