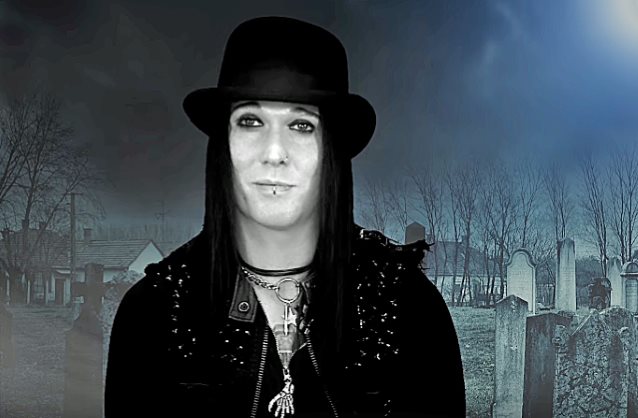 Wednesday 13 was recently interviewed by Metal Wani contributor Dawn Brown. You can now listen to the chat below.

Speaking about the current status of MURDERDOLLS, his one-time project with former SLIPKNOT drummer Joey Jordison, Wednesday 13 said: "I really just haven't spoken with Joey really at all this year. We had gotten in touch about a year ago and just established contact again and mentioned the idea of doing something in the future — not [putting] a time on it or anything; just the idea of, 'Would you be into it?' And we both said, 'Yes.' And then I got busy doing my stuff, he was touring and putting a record out, and that's the last I really kind of heard of it. So that's kind of where it is. So I can't say that it will happen, or it won't, but there's definitely not any plans or anything that's changed since the last thing I must have said [in an interview]."

Wednesday 13 also talked about his plans for the follow-up to last year's "Condolences" album. He said: "This next record, I wanna completely top what we did with 'Condolences' — soundwise, just everything. And I wanna step the show up and just really take the band to this new visual level that I have mapped out in my head. So, yeah, we're just trying to keep moving on up like the Jeffersons… [We're planning on] completing the new record by the end of the year and having a new record out, or at least be talking about it, this time next year for it to be coming out for the summer [of 2019]."

MURDERDOLLS has been inactive since completing the touring cycle in support of its sophomore album, "Women And Children Last", which came out in August 2010 via Roadrunner Records.

Jordison told CrypticRock.com last year that he "would love to do another record" with MURDERDOLLS. He explained: "I have this punk rock and pop side of me that I don't really get to get out in other areas in my life. When we did that band, it was just pretty much to express fun, have a great time, and kind of throw a monkeywrench into what was going on in rock and metal at the time, and it worked."

Jordison — who played guitar for MURDERDOLLS — went on to say that the the tours he did with the MURDERDOLLS were "really awe-inspiring when you look in hindsight of what we accomplished in a short amount of time and the two records we did. I could not be more proud and happy of what we accomplished in that time," he said. "Everyone that was in that band, the couple of different personnels we employed, the MURDERDOLLS were killer."