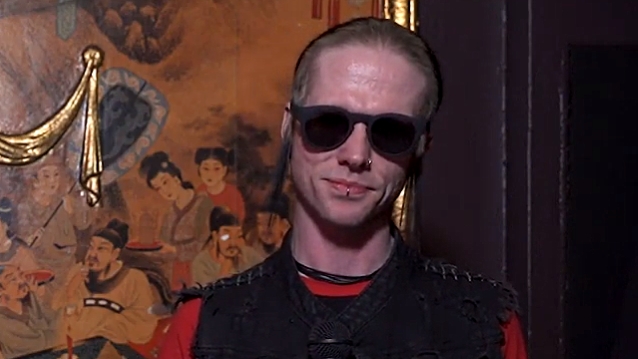 In a brand new inerview with Ghost Cult magazine, horror-punk stalwart Wednesday 13 was asked if he thinks it would be harder for him to launch his band now than when he started his career in music back in the mid-1990s. "Yes and no," he responded (see video below). "It's one of those things where I tell people all the time… They'll ask me for advice and go, 'How do you get started?' And I'm, like, 'I can tell you how I got started, but it's totally different now.' YouTube wasn't around. If you're creative and you've got something original, you've got a television right here with YouTube — you've got that outlet — whereas before, bands didn't have that. They had to go play shows and go to town, and this person had to tell this person about it. Now the Internet kind of does that for you.

"So I think it's easier in the fact you could be seen, but it's also easier to get buried because everybody knows they can do that and everybody is uploading to YouTube and everyone just gets lost in those millions and millions of videos," he continued. "But I always say, if you're good enough and you are different enough, you're gonna stand out from the pack, but you've got a perfect platform right there to use it. So you can embrace technology in that sense.

"But yeah, I've been through all the different changes. And I'm not a supporter of Spotify and [illegally] downloading music and things like that. I mean, that's the reason why a lot of bands charge double their concert tickets now and they charge for meet-and-greets, because the money that we used to make off our records we have to make it in another way. I hate that I have to do meet-and-greets and charge fans to do it, but that's how we put fuel in our vehicle to travel in.

"You can look at it as, 'Oh, well, everybody gets a chance to listen to your music.' And I'm, like, 'Well, did they see the album cover?' 'Well, no. They listened to it.' 'Well, how about the year I spent making that album cover and that art that goes along with it?' People don't see that. So there's pros and cons to the whole thing.

"I prefer when you had to go to a store to get a record — you had to make that effort," he added. "And, really, is it that hard? You'll make an effort to go get food every day. If you love rock and roll, which I did, I made an effort to go get all my favorite records. People are just lazy now, and they say, 'Oh, this is how it is now.' It's how it is because you made it that way.

"I'm all about people with Spotify — I have Spotify — but every record I listen to on Spotify, I own. I only have [Spotify] because I can play it on my phone; when I'm on tour, I don't have to travel with my stuff. But everything that I love, I went out and bought the vinyl, the CD and everything. So, if people would agree to do that, I'd be a lot cooler with it. But it is what it is. And some bands survive it; some bands don't. So we're somehow riding the rocky ship in the sea to get there. But it is what it is."

Wednesday 13's new album, "Necrophaze", is due later in the year via Nuclear Blast. The disc was engineered and produced by Michael Spreitzer of DEVILDRIVER.