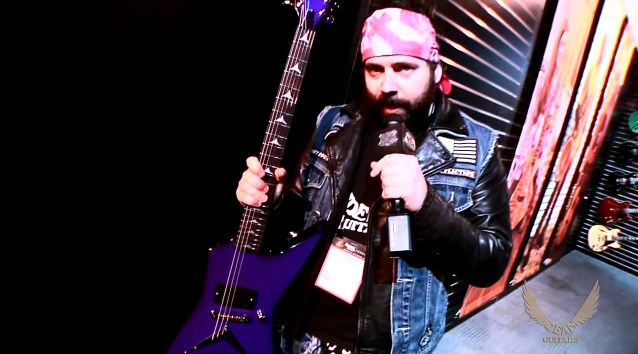 Josh Maloney, who works in artist relations at Dean Guitars, talked about the company's new Wayne Static Modifier ML guitars — built for Wayne before his untimely passing in November 2014 — at this weekend's NAMM show in Anaheim, California. Check out the footage below.

Said Josh: "As you know, in 2014, we lost a very good friend, artist, colleague and just a great dude, Mr. Wayne Static. And as a tribute to him, he requested a couple of guitars for the tour that, unfortunately, he never got to go on. This is one of them. This is our Dean ML Modifier. And as Wayne and I spoke both on the phone and via text, he was very specific about what he wanted."

He continued: "Wayne, as you well know, was a very accomplished artist, just a great guy. If you never got a chance to meet him, I feel sorry for you, because he was just a wonderful human being. His wife Tera was a great chick — and still is.

"And so we were talking. He was getting ready to go out on the tour. And he said, 'I want a couple of new modifiers.' [And I said], 'No problem.' So he wanted 'em a very specific way. He wanted a purple-and-black modifier. And what's interesting about what Wayne wanted [is] he wanted one volume knob. Obviously, there's no switch, 'cause there's only one pickup — one EMG — and he wanted an unfinished neck. So what we did was we did an oil finish, mahogany neck on this guitar — a lot like his other modifiers."

Josh added: "When [Wayne] came to us, he said, 'I wanna play an ML.' I said, 'Well, it's interesting enough that you ask that because we're coming out with a new version of the ML called the Modifier.' And Wayne, without hesitation, said, 'I wanna do it. Let's do it. I wanna do The Modifier. I wanna be the first guy to have one, first guy to play one. Let's do it.' So we built him The Modifiers way early on, and this is actually an ML Modifier built to his exact specs, which he asked me for. We built two of them — there's this one that we're showing at the NAMM show, and the other one that we gave to his wife Tera Tuesday at the Wayne Static tribute show at the Whisky, earlier this week.

"We miss Wayne tremendously. He was a great human being, a hell of an artist, an innovator, and just an all-around great guy. And we're proud to display this guitar at our 2015 NAMM show at Dean Guitars, the Wayne Static ML Modifier.

"God love you, Wayne. We miss you like crazy. And we hope you're looking down, rocking out and just having a hell of a time."

Static, whose real name was Wayne Richard Wells, was just getting ready to head out on co-headlining tours with POWERMAN 5000 and DROWNING POOL when he died on November 1, 2014.

A spokesperson for the San Bernardino coroner's office told BLABBERMOUTH.NET that "no foul play [was] suspected" in Static's death.

The coroner's office is still awaiting toxicology results to determine how Static died.