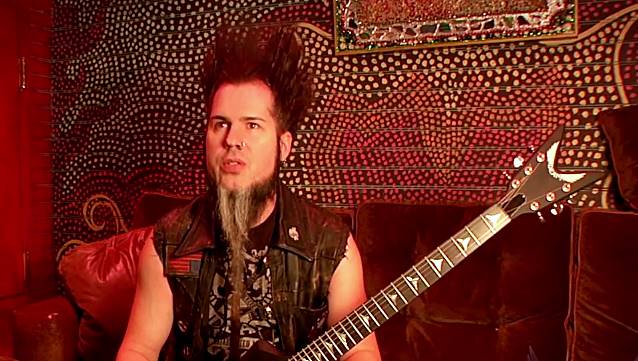 Earlier this week, Keven Skinner of Gotham News conducted an interview with former STATIC-X leader and current solo artist Wayne Static. A couple of excerpts from the chat follow below.

Gotham News: The last time we spoke, we talked about the old STATIC-X band dynamic and you had mentioned it was more of a business arrangement as opposed to a friendship. From what I noticed, about three months after that, you had to reach out to [former STATIC-X bassist] Tony Campos to talk business and the whole situation just spiraled out of control. Walk me through that period.

Wayne: It was basically attorneys talking — I never spoke to Tony [directly]. We came up with a dollar amount where I would license the STATIC-X name and go out on tour. And… it was just too much money. I had to keep playing six shows a week non-stop in order to pay him what he wanted. Eventually, my house went. I developed a really bad hernia. I had to cancel the tour and go have surgery. It was at that point where I was like, "Fuck all this lawyer stuff. I'm gonna e-mail Tony because I haven't fucking spoke to him in, like, over five years." We weren't even talking at the end of STATIC-X. So I e-mailed him and said, "I had to have surgery. Can I get some time off and let's put our deal on hold and wait until I get better then we'll start up again? And you can start making money again for doing nothing." He pretty much told me to fuck off and keep paying. And that was it. I was, like, "Alright. Thanks, dude." [laughs] He was, like, "You told people in interviews we weren't friends, so fuck you." That's what he told me, literally, that's what he said in his e-mail. I'm, like, "Sorry I hurt your feelings, you fucking baby." Jesus Christ, I have to go get fucking hernia surgery. So that's the dynamic. He fucking hates me and won't let me use the STATIC-X name. I have a new manager and she recently reached out to him and asked if he wanted to rejoin the band and tour and he doesn't want to. He's in SOULFLY and he's happy, so he wants nothing to do with STATIC-X but he won't let me use the name. So… STATIC-X is dead. I tried, you know. I did my best. In reality, though, it doesn't even fucking matter, because I've had a bunch of players and nobody cares. It may sound egotistical, but it's the fucking truth — I wrote all the songs. [laughs] Rob Zombie was WHITE ZOMBIE and I was STATIC-X. I wrote and produced everything. Other than Tony, all the other guys were hired players. So fuck it, it's just name. I have a slamming band behind me right now and we're going out and playing all the old STATIC-X songs and a couple off my last solo record. We have a good time and the shows have the same vibe as STATIC-X, I just can't call it that.

Gotham News: Face value, Tony seems to have some deep-seated hatred that goes back in order to pull that kind of stuff when you aren't being unrealistic in your business arrangements. Is there something else there?

Wayne: Yeah, we worked fifteen years together building STATIC-X and I'm, like, "Dude, don't you wanna keep this alive?" Just from a business aspect, don't you want to keep the name alive and make money? He doesn't care. Everything changed when I got married. Everyone, the band, the crew, everyone treated my wife like shit.

Gotham News: Why is that?

Wayne: I don't know. I'm sure I acted differently after I got married, I know I did. But… people get married and things change. It doesn't mean that the band has to break up. It's not like we were all best buddies and hung out every day. I don't know, man, everyone started treating us differently, treating my wife like shit and making her cry every day. The last tour we did together, Tony and I didn't even talk to each other or look one another in the eye. It's pathetic, man… It's fucking stupid. Now he hates me so much he won't even let me use the name. I'm still willing to pay him to use the name because I can make more money at the shows because of the name. But no he's, like, "Fuck you, boo hoo hoo." Alright, I guess we're done. Can't say I didn't try. [laughs]

Gotham News: What do you think changed after you got married that the guys would treat you so badly? It's not like you were doing some weird experimental shit and the music, right?

Wayne: Well, I wanted Tera [Wray] on tour with me, so she was always with me. She was with me during interviews too. We love each other. I wanna have her with me at all times. She came on stage and danced for a few songs and… I think Tony didn't like that. I think it pissed him off. I think he thought, "She's not in the band, she shouldn't be here." But the reality of it was, we'd do interviews and she'd just sit there. He didn't like the fact that she was around all the time. For all I know, maybe he thought he should've hooked up with her and ended up married to her, so maybe he's jealous. I don't know. I don't fucking know. I could give a shit if we did an interview and his girlfriend was sitting next to us. The funny thing is, before we got married and she was a porn star, she rode with us on the bus for a whole year, [and] everyone loved her then. When she was a porn star, everything was awesome. Then we got married, and everything changed. I don't know why. You can call up Tony and interview him to ask him why he hates me so much. [laughs]

Gotham News: You mentioned that during your recovery you were writing some riffs and working out some new songs. Is it safe to say that after this shitstorm, the new album will be very pissed off and angry?

Wayne: [laughs] Probably. I've got a lot to be angry about. Facing felony drug charges, people embezzling money from me and all this shit. Man, last year was a tough year. I fucking went on Prozac for a while and thought I was gonna kill myself. It was a fucking hard, hard, hard year. Things are finally coming around now. I've got a new manager and a whole new team. I ended up getting into a fucking fistfight with my merch guy on the last tour. My drummer quit…. just all this crazy shit. [laughs] But everything is coming back together and I have a positive attitude. I've got Bevan Davies, he did the last two STATIC-X tours, and he's a fucking awesome drummer. I'm really excited to bring the band out and play some old-school evil disco, put all the bullshit behind us go on stage and fucking tear it up.