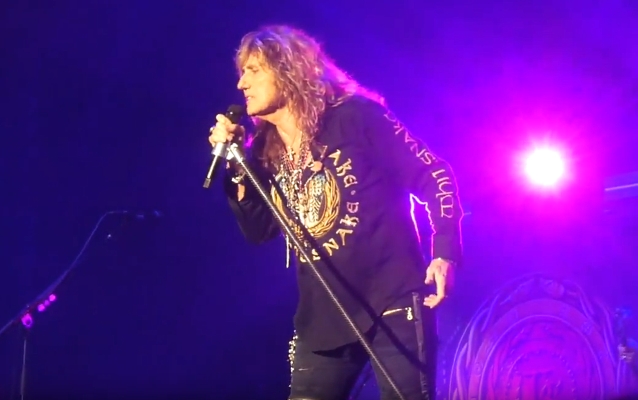 Fan-filmed video footage of WHITESNAKE's May 2 concert at Xcite Center at Parx Casino in Bensalem, Pennsylvania can be seen below.

WHITESNAKE is touring in support of its upcoming album, "Flesh & Blood", which will be released on May 10 via Frontiers Music Srl. The disc follows the 2011 critically acclaimed studio album "Forevermore" and 2015's "The Purple Album", a reimagining of DEEP PURPLE classics from WHITESNAKE mastermind's David Coverdale's time in that band.

Since joining the band four years ago, and just in time for 2015's "The Purple Album", Chicago native Joel Hoekstra has really come into his own, not only as a highly impressive axe-slinger, but also as a very accomplished songwriter too, co-writing six of the songs for "Flesh & Blood" with Coverdale.

The current incarnation of the band carries on the long and unwavering tradition of mainman David Coverdale being surrounded by cream of the crop players who go all in to bring fans the best hard rock humanly possible.

WHITESNAKE's "Flesh & Blood" world tour features songs from the new studio record alongside the band's biggest hits and songs from one of the greatest back catalogues in rock 'n' roll history, spanning over 40 years.