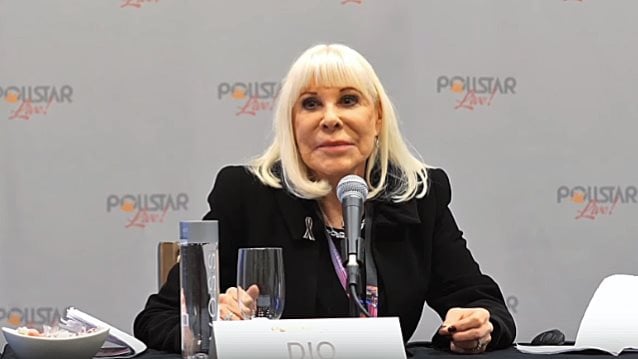 A hologram of the late Ronnie James Dio made its U.S. debut on February 2 at the 28th annual Pollstar Awards at the The Novo (formerly Club Nokia) in Los Angeles, California. Created by Eyellusion, the appearance of the heavy metal icon took place during a performance by DIO DISCIPLES, which pays tribute to Ronnie and is fully supported by his widow/manager, Wendy.

Pollstar Awards honors the best of the worldwide concert industry as the concluding event of Pollstar Live!, which was held January 31 to February 2 at the J.W. Marriott hotel.

Video footage of the panel discussion, dubbed "The Hologram Opportunity: Tapping Into Expanded Touring Potential & A New Live Experience", can be seen below.

During a recent appearance on the "Talk Toomey" podcast, Wendy spoke about plans for a tour featuring the hologram, which will showcase various eras of the legendary metal singer's career.

"We're getting prepared for that right now," she said. "We're making a new [hologram]. We're making, like, eight songs. So we're working on that. That should be ready by September, and we're hoping to go out and start touring in September on that."

She continued: "I feel that Ronnie was an innovator in music, and why not be an innovator in technology also? He tried to make a hologram in 1986. When we had the [DIO] 'Sacred Heart' tour, we did the big crystal ball with Ronnie's head in there talking, which was actually done with a rear projection, but we were always trying to do new things and exciting things. In fact, his personal [assistant] just called me a couple of weeks ago and he said, 'Hey, Wendy, I just found this interview that Ronnie did a long time ago, and they were asking Ronnie [if he had] plans to retire, and 'What will you do when you retire?' And he said, 'Well, I don't think I'll ever retire. I'll probably die on stage. Or if I don't, I'm sure Wendy will find something for me to do after.' [Laughs] So I thought that was quite funny."

Wendy, who manages DIO DISCIPLES and is affiliated with the Eyellusion team, also spoke about the response the hologram has gotten from Ronnie's fans and other musicians. "Some [reactions] are positive, some are negative," she said. "If you've actually seen it… I think the people that have actually seen it are very positive. We debuted it at Wacken last year in Germany for seventy-five thousand people, and they were all totally, totally blown away. And also, it's never been done before, because this is a live band — Ronnie's live band that he played with for the last seventeen years, with Ronnie, with a live track of Ronnie's. And it was so realistic; everybody was, like, crying, and it was very moving. And I think it's great for the fans that never saw Ronnie, that are able to come and see him. And for the ones that did see him that would love to see him again up on stage."

Hologram world tours have previously been announced, but never come to fruition. In 2015, it was announced that Whitney Houston would go on the road in holographic form, but a leak of a duet with Christina Aguilera, which suggested the hologram was not up to scratch, led to the withdrawal of the Houston hologram by her estate.

According to Wendy, it's only a matter of time before other rock legends return to life through holograms, the three-dimensional light projections that have opened new frontiers for the live music and other industries. "Absolutely," she said. "I think the company that we're working with is talking to a lot of different people. And I think it's the way of the future. It's like people were, 'Ooooh…' when the eight-track came out, 'Ooooh, what's this?' And then cassette. 'Oooh, what's this?' And digital, 'What's this? Oh, we don't wanna do that. We only want analog. We don't want digital.' But you know what? It's technology. And also, we're losing our legends day by day; we're losing the innovators of metal and hard rock music; we're losing 'em every day. What are we gonna do? I don't see a lot of bands coming up to take their place."