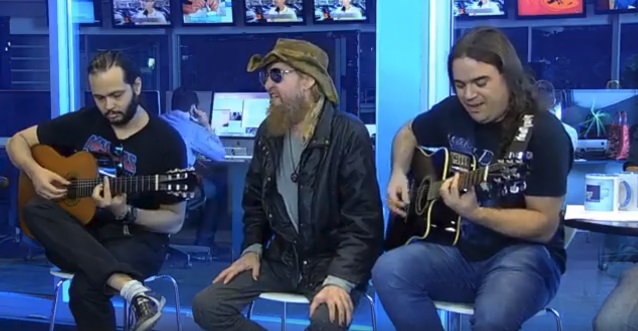 Video footage of Warrel Dane's final appearance on Brazilian TV has been posted online and can now be seen below.

On November 30, the SANCTUARY and NEVERMORE frontman was joined by Brazilian guitarists Johnny Moraes and Thiago Oliveira on the show "Sonoridades", which airs on RedeTV! The trio performed acoustically and spoke to presenters Mauricio "Java" and Gabriela Di França about the recordings of Dane's second solo album, "Shadow Work", shows in Brazil, and other topics.

Dane died on Wednesday (December 13) in São Paulo, Brazil at the age of 56. The American musician reportedly had a heart attack during the night and could not be revived.

According to Moraes, Dane had a history of addiction and other health issues. "His health was already very weak because of his diabetes and his problems with alcoholism," he said.

The instrumental parts for Dane's follow-up to 2008's "Praises To The War Machine" solo album were almost completed and he had begun laying down his vocals shortly before his death.

NEVERMORE effectively split up in 2011 when guitarist Jeff Loomis and drummer Van Williams announced their departure from the band due to personal differences with Dane and bassist Jim Sheppard. Warrel later described NEVERMORE in an interview as "the greatest band that alcohol ever ruined."

SANCTUARY, which reformed in 2010 after an 18-year break, has spent recent years touring in support of its comeback album, 2014's "The Year The Sun Died", as well as 2016's "Inception", an album comprised of presumed lost 1986 studio recordings.

Posted by Sonoridades on Friday, December 15, 2017